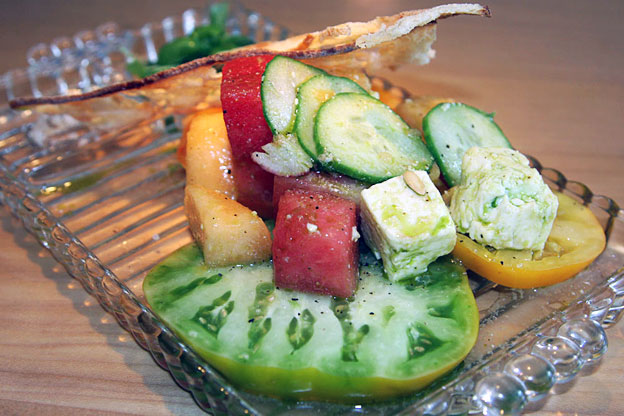 Dave Tallent is chef/owner of Restaurant Tallent in Bloomington, Indiana.  He opened his restaurant in 2003 with his wife and pastry chef Kristen Tallent.

"There are Cherokee Purples, Mr. Stripeys, Brandywines, and Green Zebras. They all have different levels of acidity, some are more juicy, some are more meaty. It just kind of varies on the varietal." Tallent is talking about the varieties of heirloom tomatoes.

He says that the great thing about heirloom tomatoes is that they don't look like tomatoes you would buy in a store. "They're not perfectly round and perfectly red, and they just have a taste that's way above anything that you'll ever find at the grocery store," he explains.

In the summertime, Tallent does not cook with heirloom tomatoes often.  Instead, he prefers to serve them raw, lightly cooked or use them for tomato sauce.

"With the tomatoes we can't get nice slices out of, we'll roast them off and make an heirloom tomato sauce," Tallent says. "It seems decadent considering they are what they are, but it's really tasty."

At any one time, Tallent can have upwards of 120 pounds of heirloom tomatoes in the restaurant, so turning them into sauce makes sense because he can get them at bulk prices.

Roma tomatoes are usually the ones he makes sauce or  paste out of, but he says some of the locally-raised slicers are also good for sauces. "They're ones that have a little more meat-to-juice ratio, so those are really good sauce tomatoes."

The Fruity Side of Tomatoes

"In addition to the tomatoes and watermelon, we take some feta cheese and marinate it with a little bit of mint oil." He tosses that with some cucumbers and radishes and finishes the dish with a bit of tarragon vinegar and mint oil.

"Tomato is actually a fruit, and watermelon is definitely a fruit," Tallent explains. "We are making them a little savory."

Not Just For Dinner Anymore

Tomatoes aren't limited to savory dishes. Also on the menu is a creation by Dave's wife and pastry chef, Kristen Tallent. She makes an heirloom tomato sorbet served with a basil semifreddo and  little filo crackers that she dusts with basil sugar. That's all served atop carpaccio-style sliced tomatoes.

"When you first taste it," Dave Tallent says you taste the tomato and the sweetness, but then –  "your brain is kind of like, 'Wait a minute, what did I just have?'"

Check out this week's podcast for more heirloom tomato recipes. Subscribe so you're sure not to miss it.