From 'Feed The 9 Billion' To 'Trade Not Aid', Farmers Will Likely Reinvent Themselves Again 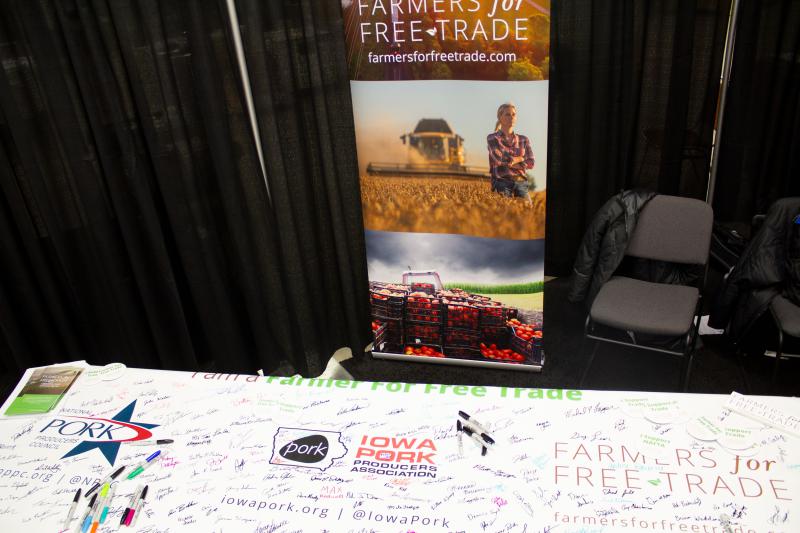 After harsh and frequent criticism from animal rights activists and environmentalists, many farmers and people who work in agriculture launched an effort to tell their stories to the broader public. A decade on, this effort has worked through several themes. With a new president coming, ag messaging may change again.

But let’s begin back in 2013 when, fresh off Barack Obama’s re-election, agriculture groups were hitting their storytelling stride. The United Nations had given them a convenient factoid: by 2050, the Food and Agriculture Organization estimated the world’s population would be at least 9 billion.

“When we take a look at the planet going from 7 billion people to 9 billion people over the next 20 to 25 years, obviously the need to increase food production’s very, very important,” said Mike Vande Logt, a plant breeder who at the time was with the seed company WinField. His sentiment echoed the messages from other agribusinesses, commodity check-off groups and farm bureaus.

Farmers signed up for media training, started talking to reporters more and engaged on platforms like YouTube to spread the message.

The message that farmers were feeding a growing world became ubiquitous. But it also touched a nerve. Environmentalists and advocates for the hungry would constantly point out that nearly 40 percent of Midwest corn becomes ethanol, feeding cars, not people.

Then, ag groups and companies, some of which sponsored social media campaigns, positioned themselves to get their messages in front of the candidates vying for the 2016 presidential nominations.

At an event in Des Moines more than a year before the Iowa Repubilcan Caucus, then-candidate Donald Trump hinted at something that would spark the mantra that replaced “feed the world.” He railed on China for devaluing its currency.

By the time Trump took office, many ag leaders had coalesced around a new message.

“Trade is important to farmers,” said Brian Kuehl, director of Farmers for Free Trade, a group established in 2017 that wanted to tell a different story.

“The folks who founded Farmers for Free Trade said, ‘Well, wait a minute, without trade, US agriculture goes down the drain.’ Twenty percent of farm revenue comes from exports.”

And then the U.S. and China lobbed tariffs on each other’s goods and many farmers watched sales in their biggest market nosedive. As the tariffs wore on, the U.S. Department of Agriculture launched the Market Facilitation Program, a series of payments to help affected farmers recover. A new slogan was born: “trade not aid.”

“Certainly right after the first round of MFP payments, that became a mantra that we heard from a lot of people,” Kuehl said.

But Iowa native Austin Frerick, who’s an ag policy researcher at Yale, sees a coordinated public relations game at play. And now he says that line’s likely to be replaced.

“They’ll hire some expensive New York City ad firm to come up with some catchy little jingle,” he said.

Frerick says he’s a bit cynical about the major commodity groups and agribusiness because as he sees it, they use these catchphrases to curry favor with the public. Then the Farm Bureaus and big check-off programs lobby politicians in Washington, D.C., and state capitals for policies that benefit their investment portfolios — not necessarily individual farmers.

“They started off with good intentions,” Frerick said, “but I just think they’ve lost their way.”

He says now, many of these groups are too big and too far removed from the farm, but farmers stick with them for some of the benefits they offer, even if they don’t like the organization’s entire policy agenda. The current system, Frerick says, forces many farmers to stick with the crops and practices that are most heavily subsidized so they can maintain their livelihoods.

“They are doing the most rational economic thing right now,” he says of farmers who are working within the system as it currently exists.

So while they say they want “trade not aid,” Frerick says when the check arrives, they cash it.

“The farmer wants to derive their profits from the marketplace,” said southwest Iowa farmer Kevin Ross, chairman of the National Corn Growers Association, who joined a virtual panel sponsored by Farmers for Free Trade in December.

When they can’t, he said the federal support might be what keeps them in business.

“For a lot of folks to keep things rolling here and keep the ag economy moving forward in the last few years,” Ross said the payments were necessary. “But we’re very hopeful that that’s in the rearview mirror for us.”

As for the next big “ag-line,” with the Biden administration coming in, it’s likely some catchy phrase will emerge as so-called “ag-vocates” gear up for whatever comes next.

Frerick has an idea.

“The one I love a lot is ‘localized supply chains,’” he says, adding, “that’s a little wonky.”