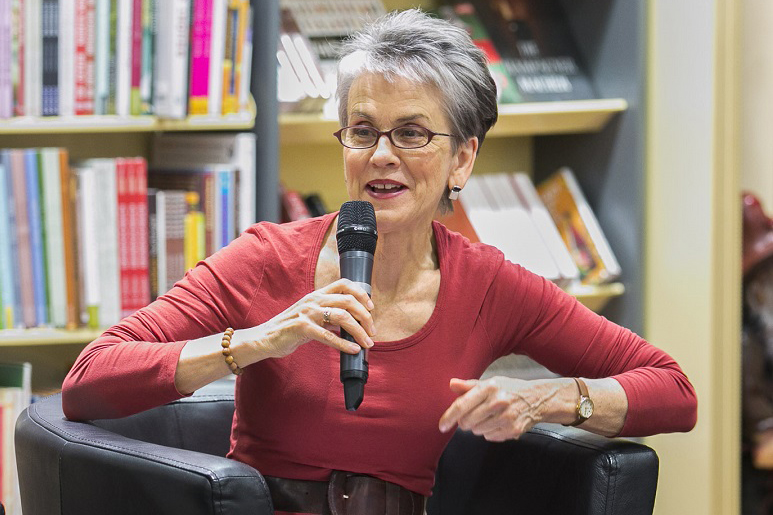 Since the release of her first book in 1971, Frances Moore Lappé has not stopped advocating for a more sustainable food system. ( Manahl Marielle)

This week on Earth Eats, a conversation with Frances Moore Lappé. She’s the acclaimed author of the groundbreaking book, Diet for a Small Planet, celebrating its 50th anniversary this year. She’s co-founder (with her daughter, Anna Lappé) of the Small Planet Institute: living democracy, feeding hope. Lappé has continued the work she began a half-century ago, of bringing analysis and insight to the study of our food systems--and how they need to change for our own health and for the health of the planet.

Frances Moore Lappé visited the campus of Indiana University this week as a William T. Patten Lecturer, to receive an honorary doctorate degree and to celebrate the publication of the 50th anniversary edition of her legendary book, Diet for a Small Planet. She received her undergraduate degree from Earlham College in Richmond, Indiana in 1966 so her visit to Indiana was a coming home of sorts, as well.

For those listeners too young to know about Diet for a Small Planet, or those otherwise not exposed to it, it can be difficult to explain the impact that it has had. In the interview, Frances tells how the book came to be, and where the work has taken her over the years.

One of Lappé's key questions is,

Why are we together creating a world that as individuals none of us would choose?

This question has led her to expand her activism from the rhealm of food to include democracy. Her organization, The Small Planet Institute has joined forces with The Democracy Movement, in what she calls a "movement of movements." Her hope is for everyday citizens to connect and to find the courage to work for the change we want to see in the world.

Hear the interview with Frances Moore Lappe in this episode of Earth Eats.

[note: There is a story mentioned in the conversation about the sugar industry influencing nutrition science publications. You can find a New York Times article about that here.]