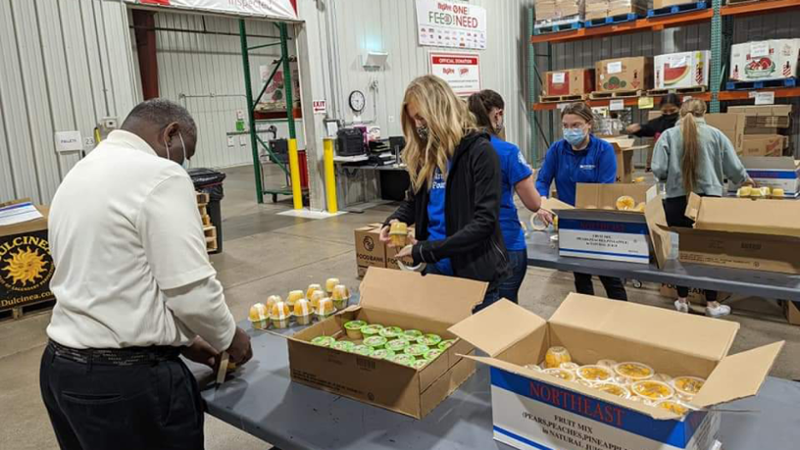 (Courtesy Of The Food Bank Of Iowa)

That crunch comes as food banks see increased demand from families struggling to afford meals. Food banks saw a huge increase in demand at the onset of the COVID-19 pandemic. And while that’s leveled off somewhat, demand remains higher than before the coronavirus upended the economy.

“Some of the things we’re looking for, we just can’t find in some cases,” says Michelle Book, CEO of the Food Bank of Iowa. “The variety is just not there. It’s more limited and the delivery times have lengthened from what we would have seen a year and a half ago.”

It’s been particularly hard to find pantry staples, including canned food, she says.

“We're finding it very difficult to find products that come in aluminum cans,” Book says. “Canned fruits and canned proteins, like chicken and tuna, are difficult to come by.”

“Inflation has had a direct impact on our operations,” says Stephanie Sullivan with Food Bank for the Heartland in Nebraska. “Pre-pandemic, the Food Bank spent roughly $80,000 per month on food. We are now spending $780,000 a month on food.”

Food shipments are also taking much longer to arrive, she says, due to truck driver shortages and supply chain disruptions.

The high cost of food is also driving up demand at food banks.

“Although things are slowly going back to ‘normal,’ there are clearly some lingering effects on the financial stability of families,” says Kim Buckman with Feeding Missouri. “Many are still struggling to get back on their feet and the rise in prices at the grocery store and at the pump isn’t helping matters much.”

Statistics from the U.S. Bureau of Labor Statistics show food prices have gone up 5.3% over the past year. The Farm Bureau reported the average Thanksgiving feast for ten people would cost $53.31, which is 14% higher than last year.

“People are really talking about the increase in prices when they go to the grocery store, and not being able to make their food budget last for a whole month,” says Molly Delaney, vice president of development at Eastern Illinois Food Bank. “Many are seeking out food pantries for the first time.”

Delaney says that while supply chain disruptions have made it more challenging for the food bank to get food, they’ve been able to keep their shelves stocked.

The bigger challenge, she says, has been a decline in donations.

“We worried that, once things started to seem more normal, it would be out of mind for people, even though the need would continue,” she says. Delaney says donations have gone down about 20% since the start of the pandemic.

“We just want to make sure that people remember that this is a marathon, not a sprint,” she says, “and to keep their neighbors who are facing food insecurity in mind.”

Harvest Public Media reports on food systems, agriculture and rural issues through a collaborative network of NPR stations throughout the Midwest and Plains.