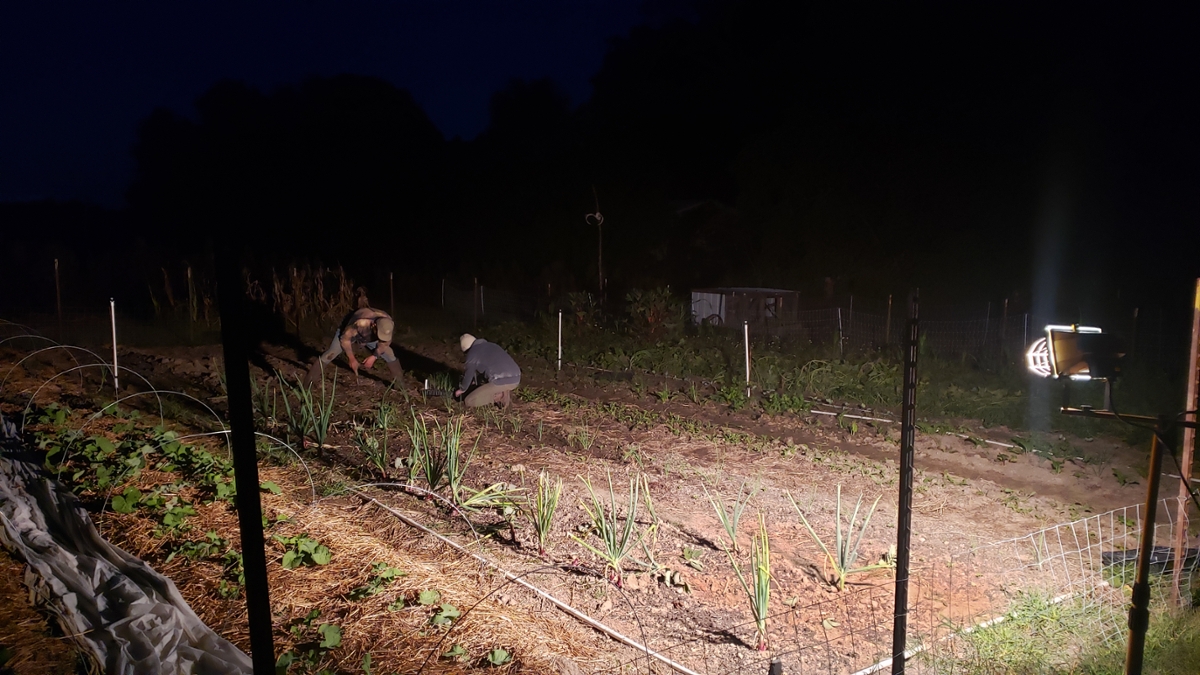 The intersections between farming and politics are numerous. Wendell Berry said, “Eating is an agricultural act. I like that quote because it helps connect food to farming, and helps me connect food, farming, and politics in a more comprehensive way. Thus, in considering the intersections of farming and politics, one must consider food politics: how food is governed and distributed. Countless federal, state, and municipal policies interact directly with food accessibility, so the idea of food as a political subject seems easier to accept. Politics refers to the activity of governance, and surely food is governed, especially once it enters a market. However, addressing the act of farming itself as political seems to be a more controversial statement. Nonetheless, farming is a political act.

The clearest way to connect farming to politics requires the definition of food sovereignty. Food sovereignty is defined by the U.S. Food Sovereignty Alliance as:

…the right of peoples to healthy and culturally appropriate food produced through ecologically sound and sustainable methods, and their right to define their own food and agriculture systems. It puts the aspirations and needs of those who produce, distribute and consume food at the heart of food systems and policies rather than the demands of markets and corporations.(1)

Food sovereignty is an alternative to the global food regime, which is currently globalized and dominated by faceless corporations and international markets. Food sovereignty is a system that empowers and perpetuates cultures. Politics is infamous for undermining food sovereignty domestically and across the globe. One clear example is the Haitian history of rice.

There is a lot to be said about this history as it pertains to the classic United States intervention in Latin American countries. Undercutting Haitian food sovereignty is one part of a larger picture. Here is an article outlining this history in a more thorough way.(2) An abridged version: Since the independence of Haiti in 1804, rice has been a healthy and culturally important staple food. Up until the 1980’s most of the rice grown in Haiti stayed there to feed its people. The United States backed coups and other actions under the guise of food aid (first accelerated in the Reagan era) led to over 80% of the country’s domestic rice consumption now being imported. This means that the majority of a culturally appropriate, healthy, and staple food crop in Haiti is now out of their control and is produced with industrial agricultural methods.

This strategic undercutting of food sovereignty serves to keep its people in a continuum of poverty and powerlessness. The value of farming in Haiti is now incredibly low, which makes the profession economically unviable and prevents growers from farming long enough to change their circumstances. This continues into the 21st century. The most significant recent example of this process was seen after the 2010 earthquake in Haiti, when the United States offered hybridized rice seed to farmers, seed that could not be saved to plant the next year. Surely, the huge, costly, and long persisting effort to remove food sovereignty in Haiti proves that food sovereignty is an empowering system to be reckoned with.

Domestic food sovereignty is sabotaged in BIPOC communities in the United States as well. Its history feels too large and nuanced to attempt here. However, here are some starting points: The Homestead Act of 1862 bolstered white land ownership. In writing, it promised 160-acre parcels of land to anyone who didn’t fight against the U.S. in the Civil War. In practice, 1.6 million white people were allotted land while fewer than 10,000 Black families were allotted land. The effects of this act alone reverberated exponentially through time. In 2000, an estimated 46 million, or 25% of the U.S. population were descended from families allotted parcels in this act of government (3). We feel its presence today in the skewed wealth and land ownership dynamics between white people and people of color.

In 1887, the Dawes Act was enforced. In writing, it granted Native Americans 160 acres of land as well. However, in practice, this forced the colonial idea of private property onto Indigenous peoples, forced them to assimilate to European culture, and greatly reduced and fractured their food sovereignty and land-based autonomy (4). This act is a one of many leading to federal indoctrination, disenfranchisement, and forced assimilation. 2.3% of farms are now operated by Indigenous peoples (5). People that identify as Native Americans account for 2.4% of the United States population (down from 100% in the 1500's).

Pigford V. Glickman was a landmark case in the United States presented to the Supreme Court in 1999. It serves as a point of reference to the continued discrimination against Black farmers by the USDA, who would refuse loans to Black farmers and fail to follow up on any civil rights complaints filed (6). After this strategic disenfranchisement, the percentage of Black farm operators dropped immensely. Down from 14% of farm operators in 1920, about 1.4% of farm operators today are Black (7). People who identify as Black account for about 13% of the United States population.

These numbers do not reflect the full context of the situation, as many minority-owned farms operate at a small level in specialty crops, granting them less influence than indicated in industrial agriculture. There are also the figures of percentage of sales to be considered, as well as land ownership figures. These figures are congruent with the skewed dynamics mentioned above.

In all cases, the oppression of a people requires the removal or hindering of food sovereignty. Food is a fundamental part of cultural independence and liberty. Food requires land. As a farmer in the United States, you are a representative of these numbers and these demographics. You are a node on the timeline of racial oppression in this country. To be a small farmer is to be a figure of food sovereignty. This must be realized and wielded by small farmers in the nation to build sustainable food systems, preserve and empower cultures, reduce negative ecological impacts, and increase the human experience in a positive way.

The solutions to food apartheid, artificial food systems, ecological collapse, and food scarcity lie in the knowledge of agrarian cultures, cultures that are largely removed from the powers behind the global food economy and that are underrepresented as policy-makers. This cultural knowledge is being co-opted by movements such as regenerative agriculture, permaculture, and homesteading--practices which are gaining attention, and profits. This refurbishing of ideas needs to be deconstructed and laid out with proper attribution that will allow for all parties to benefit and move forward. Reparations are required (13).

Farming is a political act. The relationships and history of food, land, and policy in the United States establish farming as political. These intersections are ubiquitous. Understanding this is the first step towards a sustainable and equitable future.