Farm Tools Were Designed For Men. That’s A Problem For The Increasing Number Of Female Farmers. 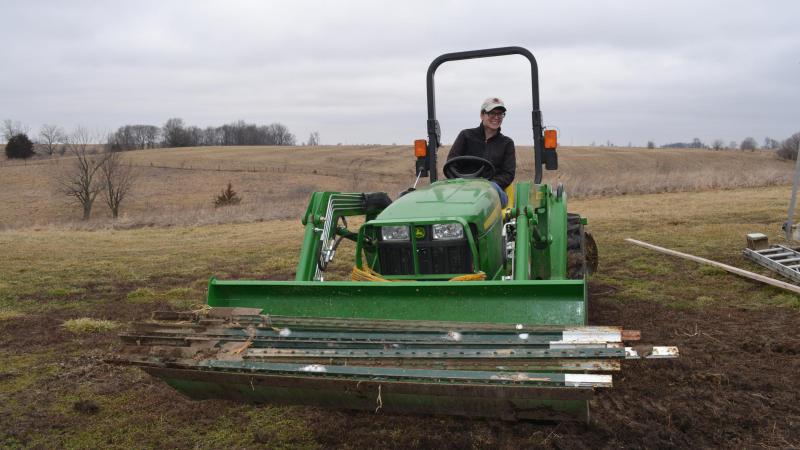 Dusty Spurgeon is proud to be a female farmer.

She and her mother-in-law, Eloise, run Spurgeon Veggies, a small vegetable farm located in Rio, Illinois.

“When I talk to some of my customers... they really like bringing their kids out here because they see me or Eloise as a role model for their young kids,” says Spurgeon. “It's like, hey, look, women can do these traditionally male jobs.”

However, as a woman-owned and operated business, one of the biggest hurdles they face is their farm equipment.

Especially their John Deere tractor. It presents a myriad of problems all stemming from the fact that it was designed with a man’s upper body strength in mind. For example, tractors often pull different implements from behind, including plowers, tillers or mowers. Switching those implements out is no small feat. It requires a lot of upper body strength.

“I can only hold it up for so long,” Spurgeon says. “So if I can't get it on within the first couple of minutes, I can't hold it anymore because my shoulders give out.”

It’s not just switching out the tractor’s implements -- it’s everything about the way the tractor’s designed. She finds the parking brake almost impossible to engage. The fuel tank is located at the top of the tractor, meaning Spurgeon has to lift a heavy fuel can up above her head to gas up.

The tractor also has a safety bar that must be up while in use. Spurgeon estimates you need about 50 lbs of lifting power to get it up over your head.

“My body is completely exhausted by the end of the day,” Spurgeon says. “During the busy season, I’m out there when the sun goes up until it goes down, and then sometimes into the night. And that's like six days a week that we're doing that… it's really hard.”

The risk of injury

Farming is a physically demanding job, no matter your body type. Women, however, are at a particular disadvantage when it comes to farming equipment.

“These were designed for people of a certain weight and certain height... pretty much reflective of the male population in the United States,” says Josie Rudolphi, who researches agricultural safety and health at the University of Illinois.

The problem, she says, is that everything is designed with a tall, heavy and strong male body in mind. Therefore, some equipment is simply too heavy for the average woman. Some women have trouble reaching the brake on a tractor. Hand tool grips are often too large for the average woman’s hand.

She says this can result in less productivity on the farm.

“Women are very, very capable of running these pieces of equipment. Sometimes getting them started or… reaching the brake and the clutch at the same time creates a challenge just based on the size and nature of some women,” Rudolphi says.

Farming is already a dangerous job, Rudolphi says, and for women, the potential for injury is high.

“We see a lot of musculoskeletal conditions, so that low back pain, shoulder pain, elbow pain and knee pain, and that a lot of times emerges from repetitive movement, awkward posture and performing work without the appropriate tools,” says Rudolphi. “Certainly using a tool that's not designed for you… is certainly an example of not having the right tool for the job.”

Liz Brensinger and Ann Adams had had enough of their heavy, hard-to-use farming equipment. With backgrounds in public health, the pair set out to find tools that were ergonomically designed with their bodies in mind.

“There were companies that painted crappy tools pink and called them ladies tools,” Brensinger says. “But we couldn't find a single case of tools or equipment in the ag sector that had been scientifically designed to work well for women.”

Brensinger and Adams wanted to change that. They co-founded Green Heron Tools, a company that focuses on researching and designing tools and machinery designed for women.

“[We use] a scientific design process to match the tool, not just to anthropometrics, kind of the size and shape and function of women's bodies, but also how women tend to work, which is different from how men tend to work,” Brensinger says.

Having trademarked the term “hergonomic,” their female-friendly tools are generally lighter, have patented grips to accommodate smaller hands and come in a variety of sizes. For example, their spading fork capitalizes on the user’s lower body strength by enlarging the fork’s step. They’re currently developing a walk-behind tiller that’s lighter, more steady and battery-operated to avoid pull chain mishaps. They’ve received grants from the U.S. Department of Agriculture’s (USDA) Small Business Innovation Research Program to develop these tools.

Brensinger says many of these tools work better for men, too.

“The way I like to talk about it is they're nice to have for men, but they’re need to have for women,” she says.

She says other manufacturers don’t have a financial incentive to change their tool design.

In an email, a spokesperson for John Deere, one of the largest farm machinery manufacturers in the world, emphasized the company’s commitment to “customer fit and ease of use.”

“As the process begins, the team uses digital models to account for a number of human factors including height, weight and reach,” the statement reads. “As design progresses, real people are invited to operate the equipment and validate the design. Those people are both men and women and represent various body sizes and shapes, ages and physical abilities to ensure confidence in the product design.”

‘There’s just something really wrong with that picture’

If Dusty Spurgeon is grateful for anything, it’s that she’s taller and stronger than the average woman.

“It's almost like I'm not being taken seriously even by the powers that be,” she says. “I'm a pretty capable farmer and it's really, really hard work, like physically… And I feel like having things that aren't made for me or don't have me even in mind makes it that much harder. And that's frustrating.”

More and more women are facing this problem every year. According to the USDA’s most recent Census of Agriculture, roughly 36% of all farmers are female, and that rate has been increasing for the past decade.

“To have women playing this important role, and having to use tools and equipment that don't fit them, that aren't going to work as well for them as they need something to and that might actually hurt them… there's just something really wrong with that picture.”