Drought has dried up rivers and lakes, revealing abandoned towns and shipwrecks 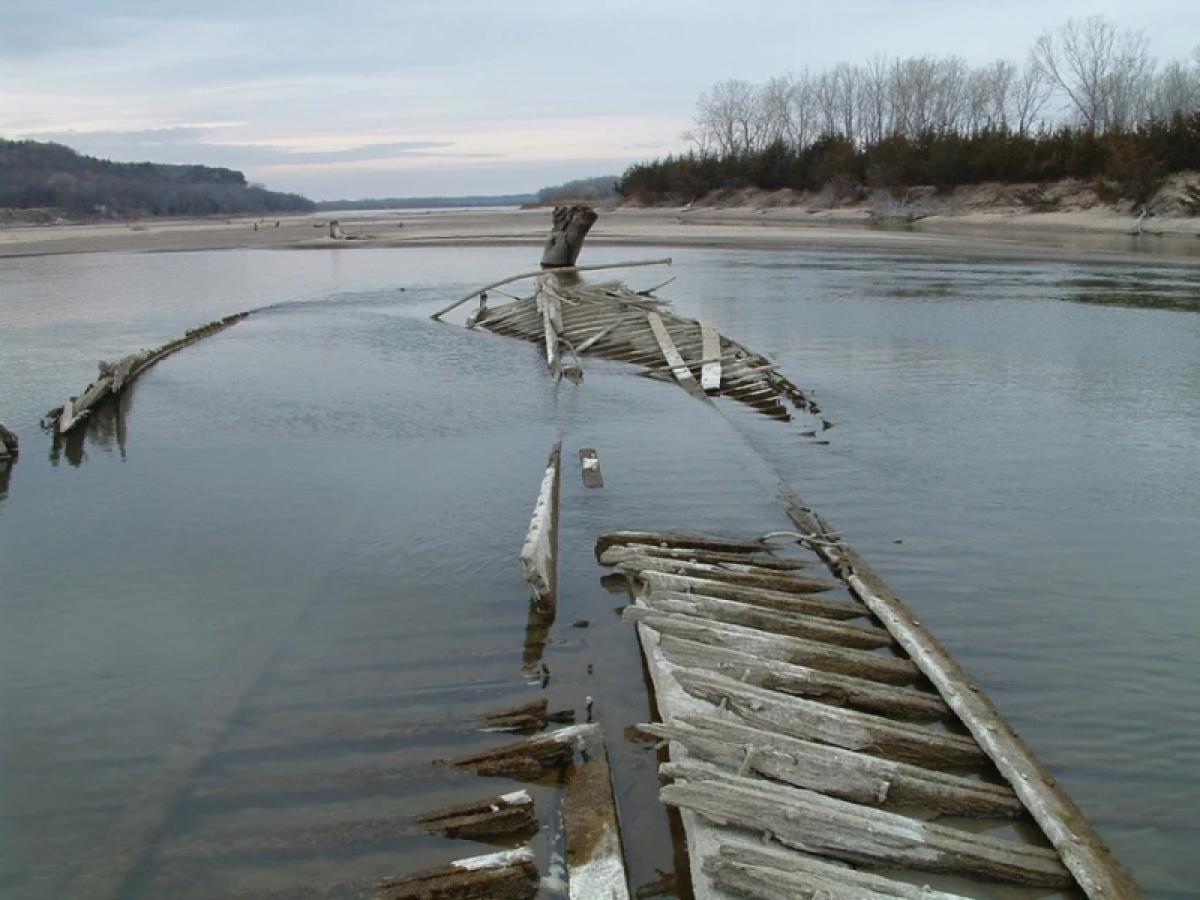 The North Alabama steamboat sank in October 1870, and its hull has remained wedged in the Missouri River near Vermillion, South Dakota for more than 150 years. The shipwreck is typically submerged by several feet of water but surfaces during dry years. (Photo Courtesy Of The Missouri National Recreational River)

Peaking just above the muddy waters of the Missouri River near Vermillion, South Dakota, are the skeletal remains of a steamboat’s hull.

The North Alabama went down in 1870, but it reemerged due to the river’s low level this summer.

“It’s exposed the backbone of the ship,” said Tom Downs, the Missouri National Recreational River’s chief of interpretation, education and outreach. “Many decades later, we’re reminded of the history when the water goes down.”

It’s one of the many historical treasures that drought is revealing across the Great Plains and elsewhere around the world. In central Texas, dry conditions recently uncovered dinosaur tracks from 113 million years ago. Low river levels have exposed Nazi warships and bombs in Serbia and Buddhist statues in China.

The North Alabama’s history is perhaps less dramatic than footprints of prehistoric creatures or remnants of war, but it gives a glimpse into a time when steamboats dominated American rivers.

The Missouri River was like a highway before steamboat traffic died down in favor of railroads and barges. Between 1819 and 1895, more than 400 steamboats sank on the river. Most of the shipwrecks were swept away by shifting sandbars and currents, and very few are still visible.

“So the North Alabama really is a relic,” Downs said.

The steamboat was taking winter supplies to military outposts in October 1870 when a log tore a large gash through its bottom.

It’s believed no one was injured and everything was salvaged from the boat – except for its hull, which occasionally rises above the waterline during dry periods, including droughts in 2004, the 1930s and 1906.

“A lot of people pretty much forget about it between droughts,” Downs said. “But when water levels drop and it emerges, people take notice.”

Something that’s also exposed by low water levels? The log that snagged the North Alabama and took it down 150 years ago. It sits right in front of the shipwreck.

Climbing on the ruins or taking souvenirs is forbidden, but the parks service encourages visitors to approach and take pictures of the wreck, which generates interest when it surfaces.

“I think it stirs the imagination to think about a day when steamboat travel was the ticket,” Downs said. “That’s how you got up and down the river. There was a time when people actually rode on these boats and traveled hundreds of miles to get to forts and other places to deliver goods.”

Western Nebraska’s Lake McConaughy is so dried out that it’s revealing remnants of old Lemoyne, the small town the government flooded starting in the late 1930s to establish the 30,000-acre reservoir.

For example, Beverly Harris’ grandparents’ old root cellar has surfaced. Arch and Ivy Harris took everything they could when the government bought them out with eminent domain in 1940, but had to leave behind the basement.

Harris said it’s a sentimental sight to see what’s left of her grandparents’ old home. It reminds her of the strong connection her family feels to Lemoyne and the friendships that outlasted the old town.

“My grandfather helped move the old Lemoyne church and wrote ‘Lemoyne’ as his address for all his life, even though our address was ‘Brule,’” she said. “He was very proud of where he was from, and it was a solid community with families who took care of each other for generations.”

Tomás England — a teacher in Ogallala and the county’s unofficial historian — remembers finding the sole of a woman’s shoe, glass jars and bottles when the lake was at a record low in 2004.

He said the old artifacts can offer an intimate look into the past, and help people remember what life was like before modern conveniences.

“People have a connection with seeing a home, because they know that it was at the center of somebody’s life,” he said. “It’s like unraveling a mystery that’s buried under the lake most of the time, and when the water levels get lower, you get to live through that.”

This story was produced in partnership with Harvest Public Media, a collaboration of public media newsrooms in the Midwest. It reports on food systems, agriculture and rural issues. Follow Harvest on Twitter: @HarvestPM