Despite Being Prioritized, Meatpackers Face Months-Long Wait For COVID-19 Vaccines 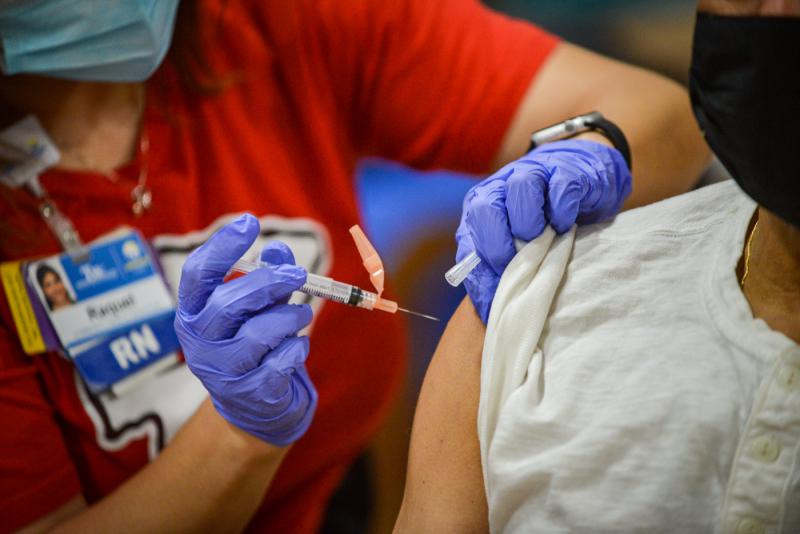 Despite being prioritized for COVID-19 vaccines in several states, meatpackers could wait months to get an appointment. (CARLOS MORENO / KCUR)

Since the start of the COVID-19 pandemic, hundreds of meatpacking plants across the country have struggled to contain outbreaks. Many of the hardest-hit plants are in the Midwest and Great Plains, where the virus initially spread on crowded production lines.

Several states responded by prioritizing plant employees in their vaccine plans, and several companies are eager to secure doses for their employees. Ongoing vaccine supply issues across the country could force most workers to wait months for their turn to get the shot.

In Nebraska, 6,739 people working in meatpacking plants have gotten sick, with 249 hospitalizations and 26 deaths.

Most of those cases are divided across plants owned by major meatpackers, including Tyson, JBS, Smithfield, and Cargill. Some outbreaks were bad enough to warrant temporary closures: in the northeastern town of Dakota City, nearly 800 workers at a Tyson beef plant tested positive last spring, forcing the facility to close for cleaning.

Lincoln Premium Poultry, based in Fremont, Nebraska, has seen around 250 COVID-19 cases since the start of the pandemic and 2 deaths. The facility turns chickens into vacuum-sealed boneless thighs and whole rotisserie birds for Costco warehouses across the country.

According to management at the poultry plant, about 40% of workers want to get the COVID-19 vaccine. Lianila Gonzalez, who supervises the morning shift, is eager to get the shot and already knows what she’s excited to do afterwards.

“I want to travel … [right] now, I can’t go to see anybody because I don't want to go into anywhere,” she said. “It’s more safe for me and my family to stay in my home.”

Once it’s safe, she’ll head to Houston, Texas, where it’s sunny and warm, to visit her family. After seeing her community in Nebraska struggle with the virus — and losing her own dad to the illness — she’s confident in her decision to get vaccinated.

“This virus is really bad,” she explained. “I want to protect myself and the people who stay around me … and for my family and everybody ... because I'm working with a lot of people.”

Hurry up and wait

Jessica Kolterman, a senior manager, says Lincoln Premium Poultry has tried its best to plan ahead for when the vaccine comes. After the Food and Drug Administration cleared the Pfizer and Moderna vaccines for use in December, the company scrambled to survey workers about whether they’d take the shot. Workers were also asked about their health and other risk factors.

The result was a scaled down version of what states have already designed — a tiered system based on a worker’s risk.

“We've tried to put them into tiers based on a variety of criteria, among that, how close in proximity [somebody] works to others,” she recalled. “We also look at how old these individuals are.”

Now, Kolterman says she, like the rest of the country, is playing an anxious game of hurry up and wait.

“I'll get a call from the health department and they'll say, ‘We have vaccines for you,’ and it may be five, it may be 50. But we're gonna have to mobilize immediately,” she said.

That call will come from Terra Uhing, executive director of the Three Rivers Public Health Department, which covers three counties outside of Omaha, Nebraska. “I can tell you, I've got people beating on my door in every single industry trying to persuade us why they need to go first. And that isn't even up to me,” she said with a chuckle.

Many states, including Nebraska, are still trying to vaccinate other groups first. Under Phase 1B of the state’s vaccine plan, food processing workers are in line for the vaccine behind people over 65, those with certain high-risk conditions, first responders, and teachers.

Guidance about who to prioritize has been fluid at times in Nebraska, and Uhing says it can change hourly on some days.

If there were more doses, she knows exactly what she would do to speed the process along.

“I would do this in a heartbeat, I would take our vaccine and I would give more to our community partners. We would utilize more pharmacies. We would do all of that,” she said. “We’ve got to really get the communities to understand that this is not a bad rollout … this is not that we are not organized. We don't have the vaccine.”

The shortage reflects larger supply concerns across the United States. Uhing only has about 900 doses a week to give across three counties. In January, the department received over 11,400 calls to its offices from residents regarding the vaccine.

Some offices’ allocations are even smaller. The nearby East Central District Health Department, which services communities not too far from Fremont, recently conceded they only have about 100 doses a week to distribute, with thousands of people on their waitlists.

For all the company’s eagerness, Kolterman says she’s tried not to lobby the health department too hard for vaccines. In the meantime, Lincoln Premium Poultry is hoping to convince more workers to take the vaccine once it’s available to them.

Some processors, like the megapacker JBS, are even offering bonuses to workers who get the shot. Lincoln Premium Poultry isn’t doing that, but Kolterman says the company is partnering with local health officials to provide workers with information about the vaccine, especially to hard-hit immigrant communities, where some people may be less likely to trust the safety of vaccines.

COVID-19 has particularly affected Nebraska’s Latino population, which makes up 11% of the state’s population but at least 18% of its cases. Kolterman recently advertised a community vaccination event geared toward Spanish-speaking residents over 65, and she says she was inundated with responses.

There are some less official efforts, too, to build trust in vaccine safety. Management has already identified several workers — management and line employees — who are willing to go to the front of the line and show that they’re excited to get vaccinated.

Steve Key, who works on the same shift as Lianila Gonzalez, says he’s been talking the vaccine up with peers who are on the fence. He even put on an impromptu skit one morning to debunk misinformation.

“If I can make a fool out of myself and convince one person that wasn't going to get it to take it, I’ll feel like I will have won,” he said.

At first, he wasn’t sure if he wanted the vaccine either. Then he encountered the virus up close. His wife tested positive after attending a Thanksgiving gathering.

While she didn’t require hospitalization, he remembers she was in pretty rough shape for half of December.

“After seeing it firsthand, I don't want it,” he said. “My only question is, when is it [the vaccine] going to be here?”