Carbon Is A New Cash Crop For Some Farmers 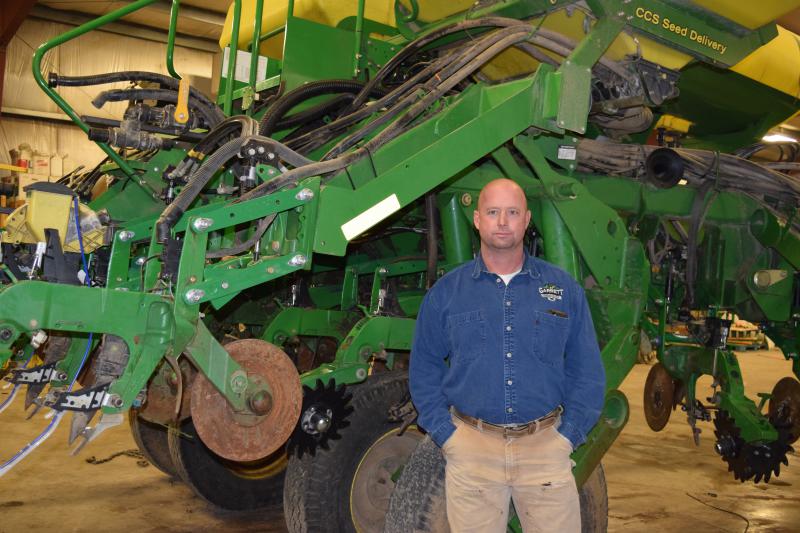 As of early February, Iowa farmer Kelly Garrett has made about 115,000 off of the carbon that his plants remove from the air. (KATIE PEIKES / HARVEST PUBLIC MEDIA)

There’s been a lot of hype around how farmers can make money from selling the carbon their plants naturally remove from the air, but there are still questions about how much of a difference these markets can make in reducing greenhouse gases.

Kelly Garrett is experimenting with carbon markets on his farm in western Iowa’s Crawford County. As of early February, he’s made $115,000. Most of that money came from Canadian e-commerce giant Shopify, which bought 5,000 carbon credits from Garrett.

“The fact that I can sell these carbon credits is just a bonus to me,” Garrett said. “A great bonus. A great added income.”

Garrett said he’s using the money to help pay for part of a farm he bought across the road from his workshop. He said he has only invested a few hours of his time to earn that money.

Garrett practices regenerative farming, which focuses on improving the condition of the soil. It made him an ideal target for the carbon market. Last summer, Locus Agricultural Solutions, an agtech startup, approached Garret and other farmers in an online community looking for an early adopter for the market. Garrett was on board.

“I just kind of thought, ‘Let’s give this a try,’” Garrett said. “It’s good for the environment, and it can be some added income.”

Usually, farmers have to try a new conservation practice to enter a carbon market, but the pilot program that Garrett enrolled in allowed farmers to earn carbon credits as long as their practices were implemented in the last 10 years. Garrett’s farm became 100 percent no-till in 2012. And he did try something new for the carbon market: He started using a Locus Ag soil probiotic that the startup says can sequester more carbon, enhance soil health and increase yields.

Garrett worked with Locus Ag to enter a pilot program through the Nori carbon removal marketplace. He still had to confirm he had sequestered carbon in half of his land between 2015 and 2019. A third party came to collect soil samples to quantify the amount of carbon.

After this was done, they determined that Garrett’s plants had removed nearly 23,000 metric tons of carbon from the atmosphere over five years. Locus Ag says that’s about equal to offsetting the average yearly emissions of almost 5,000 cars.

Locus Ag CEO Grant Aldridge said farmers are always looking for new ways to make money and for ways to diversify their operations. He said many are already benefiting from using regenerative agricultural practices.

“What was lacking and what we’re involved in is how do you translate what they’re doing, bring in new practices that help them do it better and more intensely to an ability to monetize something that there’s a buyer right there, there’s a market for it,” Aldridge said.

Big corporations like Amazon are trying to offset their greenhouse gas emissions. So they’re buying carbon credits from sustainable farmers like Garrett.

“And demand is on the rise, and supply is slow to catch up,” Hernandez said during a recent webinar pitching different carbon and ecosystem markets.

Many large corporations have committed to reaching net zero carbon dioxide emissions, and Hernandez said more are seeing carbon offsets as a way to meet that goal.

A lot of variation

But the science behind how much agriculture can reduce carbon dioxide emissions isn’t clear.

Carbon dioxide molecules are made up of two oxygen atoms bonded to one carbon atom. Plants pull carbon dioxide from the air as part of photosynthesis. They release oxygen back into the atmosphere and turn some carbon into plant tissue like stems, leaves and roots. The rest of the carbon leaks out through the roots and into the soil. If undisturbed, that carbon could stay in the ground for thousands of years. However, tilling can quickly send the carbon back into the air.

Marshall McDaniel, a professor of soil-plant interactions at Iowa State University, said there is not always an immediate effect on the soil once a farmer makes a change in their practices.

“After a farmer makes a change in management, it just takes a long time for there to be a detectable difference or detectable change in soil carbon,” McDaniel said.

McDaniel said some conservation practices improve soil health and enable it to store more carbon, but it’s hard to say how long carbon can remain in the soil. He compared the soil to a bank account: There is always carbon going into the earth through plants, and there is always carbon leaving. “But there’s other forms of plant carbon that stick around in the soil for thousands of years,” McDaniel said.

But how to quantify the carbon is challenging, McDaniel said.

“Even in just a 100-acre field, you would have a lot of variability in soil carbon,” McDaniel said. “And sampling and representing that field correctly and then also being able to monitor a change in practice that usually increases carbon very slowly and probably inconsistently in space too is difficult.”

A piece of the puzzle

In the larger picture, agriculture is just one part of the solution to reducing greenhouse gas emissions.

“It’s an important part of the solution,” said Madhu Khanna, a professor of agricultural economics at the University of Illinois. “But we need the rest of the sectors, rest of the economy to be contributing as well to reducing emissions by reducing fossil fuel use.”

The transportation and electricity sectors release more greenhouse gases than agriculture does. But Khanna says it’s great to see carbon markets emerge as a way to reward farmers for capturing and reducing emissions.

President Joe Biden has shown interest in using carbon capture to fight climate change. But it will take a lot of farmers and a lot more industries to have an impact.