As Payments Dwindle, Farmers Drop Out Of USDA Conservation Program 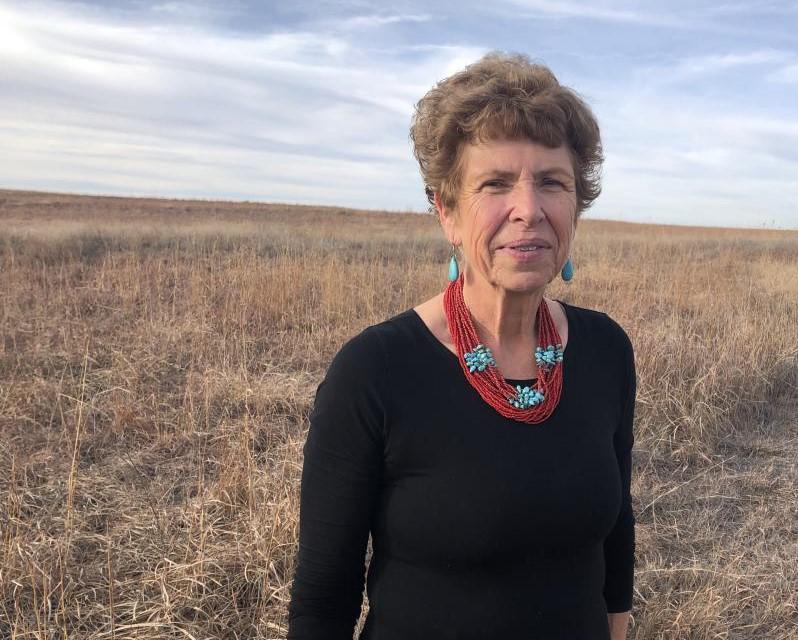 Mary Chris Barth, a farmer from the panhandle of Oklahoma, stands on Conservation Reserve Program land. The program was created in the 1980s to control soil erosion. (SETH BODINE / HARVEST PUBLIC MEDIA)

Mary Chris Barth knows how important it is to control the soil in the panhandle of Oklahoma. She’s the child of parents that grew up in the Dust Bowl. When farmers started planting fence row to fence row in the 1970s and removing the native plants from the soil, she remembers farmers trying to control the dust. Barth, a former president of the Beaver County Farm Bureau and a farmer in the area, says some of the soil should have never been touched.

“They would call us out of school to try to control the erosion, and you couldn't see the front of the tractor. They had the highway shut down while we worked the fields, and they used front end loaders to clean the highways,” Barth says.

The U.S. Department of Agriculture created the Conservation Reserve Program in 1985 to help prevent soil erosion. The program pays farmers to cover their land with vegetative cover for 10-15 years. Today, with more than 20 million acres, it’s the biggest conservation program for private land in the country. But lowering payments in some areas are causing some farmers to opt out of the program.

Barth says CRP was a salvation for many farmers at the tail end of the farm crisis in th 1980s. The pay used to be good — about $40 per acre in Beaver county. Now, it’s down to $18. The rates are determined by an arm of the U.S. Department of Agriculture through a survey administered by the National Agricultural Statistics Service.

Joy Alspach, conservation program chief for the Oklahoma Farm Service Agency says a couple years ago, states were allowed to set their rates locally and provide documentation and reason for that. In recent farm bills, that’s changed.

“Folks that were in before the last couple of years, they started out with good rates, because they were set by the state,” Alspach says. “And now that has changed and they're set through NASS.”

Farm Service Agency county committees can still request alternative rates when they consider the NASS estimate different from what they are experiencing, according to a USDA spokesperson. Those alternative rate proposals are reviewed by a panel of experts.

County average rental rates are adjusted on each farm, accounting for soil productivity and are periodically updated by the National Resource Conservation Service, the spokeperson says. Lower productive soil would receive rates lower than county averages.

Chad Budy is one of those farmers who won’t be re-enrolling some of his land in the program. He has about 800 acres at his farm in Alva, Oklahoma in CRP, and 160 acres are expiring. He says he’s currently paid $50 per acre, but if he renews, it would drop to $19. For that reason, he’s using the land to graze his cattle. Over time, he expects many farmers will make similar decisions.

Where Budy farms in Woods County, Oklahoma, 6,673 acres expired in September 2020. Farmers chose not to re-enroll 85% of the expired land in CRP, according to data from the Farm Service Agency.

Besides the money, many farmers also are interested in preventing soil erosion and promoting wildlife. Jessica Barnes and a team from Virginia Tech researched why farmers in Oklahoma, Kansas and other states in the Great Plains enroll in the program. More than 2 million acres of former cropland is set to expire between 2020-22 in the southern Great Plains.

“CRP participation is often heavily motivated by an interest in financial stability, that at the time, that CRP rental payment that comes annually makes financial sense for the landowner,” Barnes says.

Barnes says landowners often know that the land is not suitable for farming, so they apply for the program. She says more than half of those surveyed kept their land as grass after leaving the program.

Barnes says the grasslands established by the CRP are a substantial help in stabilizing the soils, and also contribute to the health of the playas — basins unique to the area that occasionally fill up with rainwater.

“Those playas provide really critical wetland habitat for a diversity of species,” Barnes says. “And those plays are also critical for recharging the local aquifer.”

In Oklahoma, 220,296.2 acres expired in September 2020, and 98,181.4 — less than half — were renewed. Alspach says the amount of land expiring in the next couple of years worried her at first, but last year’s enrollment was good.

“We had a pretty good percentage that reapplied and then also our acceptance rate was really high last year,” Alspach says.

There is a cap on how much land can be in the program across the country, but Alspach says 85% of Oklahomans who applied were accepted.

Alspach says keeping erodible land untouched prevents the next dust bowl. She says while it’s too soon to tell what enrollment will look like in 2021, she says she has a good feeling based on past enrollment that soil will remain untouched and in place.