All we want for Christmas is ... Spam Figgy Pudding? 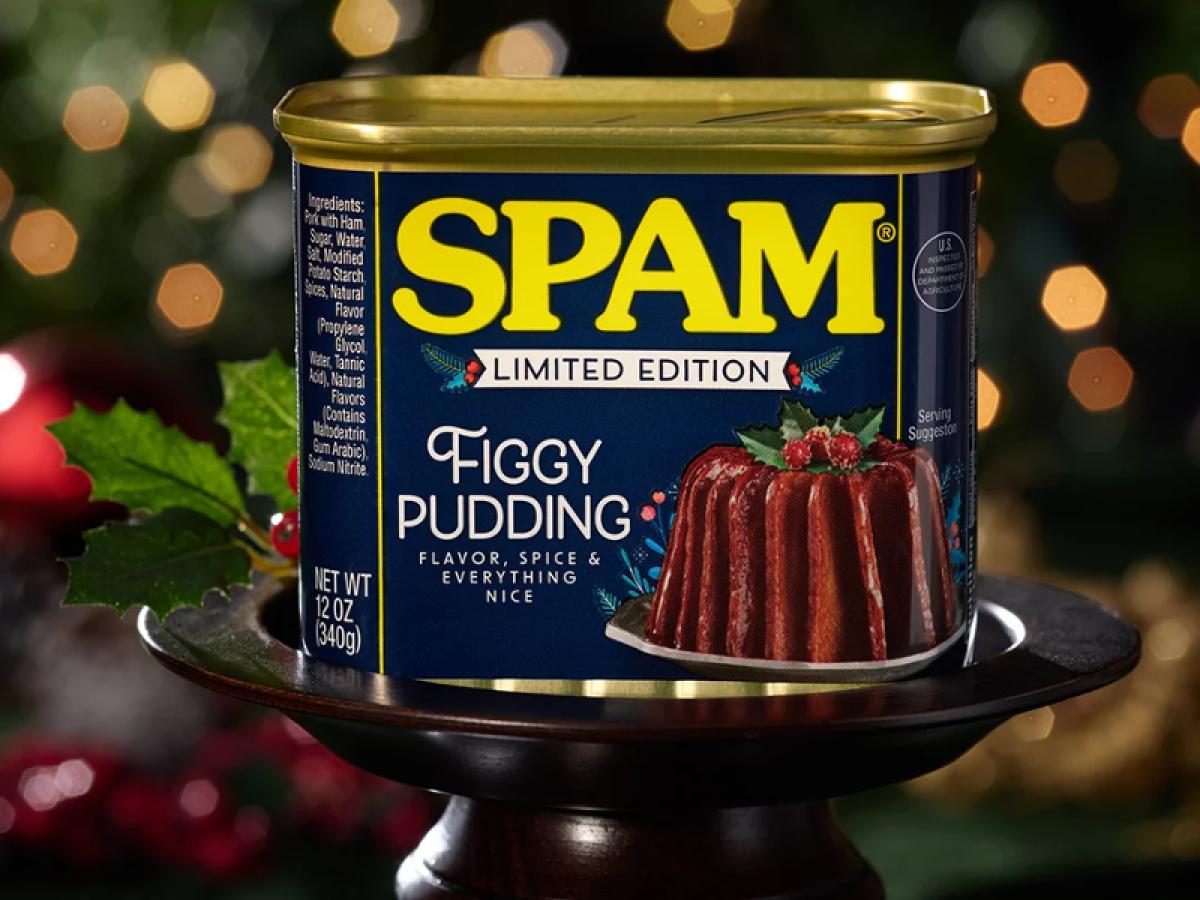 As the Thanksgiving and Christmas season returns to something like normalcy, perhaps it's time for new traditions. The mad scientists at luncheon meat packager Hormel have one idea: Spam Figgy Pudding.

The first question is easier than the second. Let's start with what's in "classic" Spam: pork, sugar, water, salt, potato starch, and sodium nitrate (a preservative).

The new seasonal Spam includes additional "fig and orange flavors, cinnamon, cloves, nutmeg, ginger and all spice." And as ever, it is shelf stable in case of the apocalypse.

Lest you say this is a perversion of figgy pudding, let's look a little more closely at that British holiday tradition. Figgy pudding is a dense, steamed cake (not an American-style pudding) full of raisins, currants, and brandy — and the modern version doesn't actually include figs, as NPR has previously discussed.

Does Spam Figgy Pudding sound good to you? Wow, OK. In that case, you may need to move quickly. The product launched last week, and is already sold out at Spam.com and Amazon. Your best bet now is Walmart.com, or you'll have to resort to the secondary market (not making this up) on eBay, where prices are already double the list price.

In terms of the "why," the company explains its reasoning thus: "The makers of the SPAM® Brand wanted to create a limited-edition seasonal variety that captures the magic, warm flavors and nostalgia we all crave during the holiday season. And with SPAM® Figgy Pudding, the brand did it all in one can."

Though other relevant answers seem to be novelty and media attention (hello!).

The only review on Amazon claims the product is "Definitely different, but real tasty!" The Washington Post's reviewer begged to differ, describing "an intense faux-orange flavor that brought to mind those horrifically dyed and colored candied fruits that somehow make their way into objectionable holiday sweets, backed by a discordant chorus of baking spices."

If you do get your hands on Spam Figgy Pudding, it can be fried, baked or grilled, though it's already fully cooked and ready to eat straight from the can. Hormel recommends making skewers of red onion, figs, and cubes of Spam, broiled and coated with a balsamic glaze and a sprinkle of rosemary.

This reporter regrets that she has not been able to obtain a can of this holiday-inflected meat product. Perhaps that's truly good tidings.