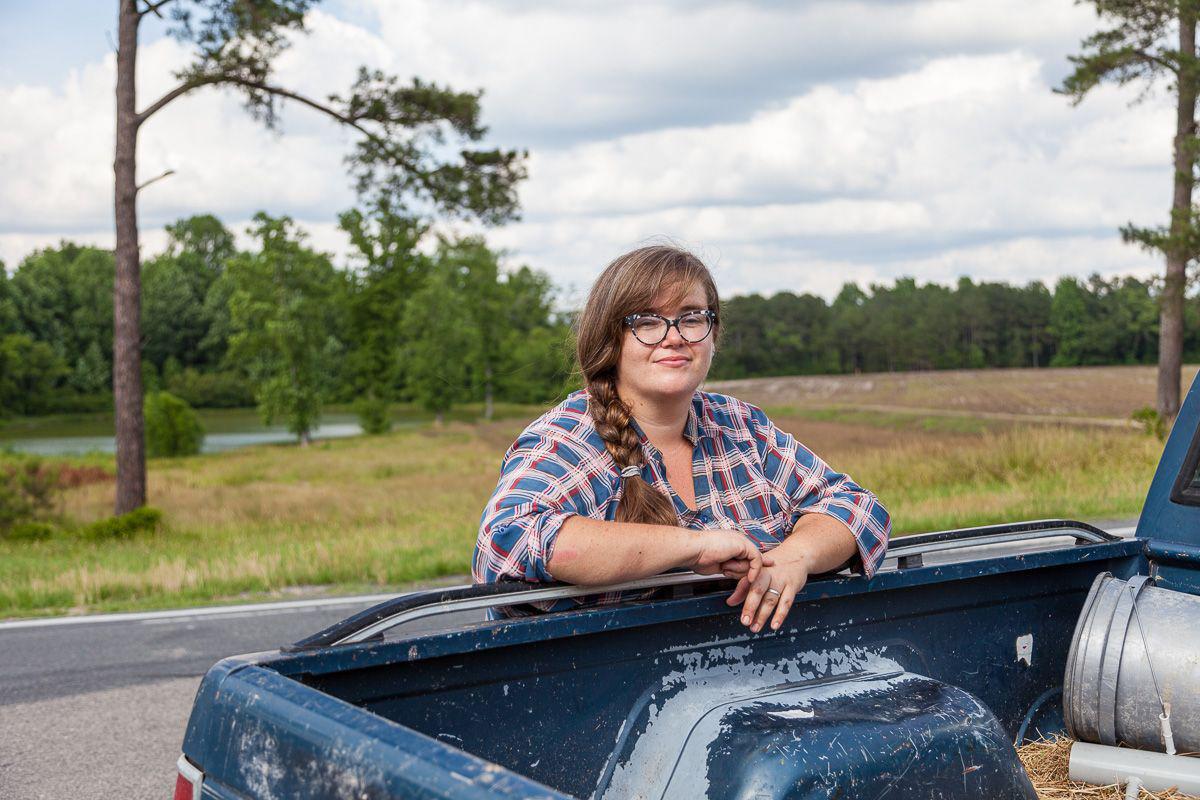 Rachel Herrick's approach to farming is a departure from what she grew up with. The sandy soil she's working with demands organic inputs, and she found some friendly sources. (courtesy Lise Metzger)

“When we got here, there was really no thriving topsoil to speak of,” says Rachel Herrick, owner of Slow Farm in Cameron, North Carolina. “There were places where you could just stick your whole arm in up to the elbow. Because it was just sand, dead sand.” Slow Farm is located in a small region of North Carolina known as the Sandhills. “This all was beachfront property millions of years ago,” explains Rachel. “The Sandhills is aptly named, our soil is sand.”

Rachel’s previous career is as an artist and educator, but she’s also a third-generation farmer and originally from Maine. She grew up watching her family till the soil and use ample chemicals to remediate weeds. She holds respect for the difficult labor of this kind of farming and the pride that her family got from their work. But when she bought her 47-acre property in 2015, she wanted to do things differently. “What I saw growing up was farming that broke people in every way that it could, and broke ecologies, as well,” she says.

Her own plot of land was originally a longleaf pine forest that was later logged for pine and turpentine. Conventional and increasingly industrialized farming methods were used to grow tobacco and food crops. “But sand doesn't have a lot of nutrition in and of itself,” Rachel says. “So then it became a high chemical input situation. We already have problems with water retention in the sand, and then you add chemical fertilizers and it just really wipes out any chance that a soil mycelium network could possibly have.”

In order to grow food, Rachel needed to rehabilitate the soil - and that would be a difficult and lengthy project. She first tried to reinvigorate the soil with green manuring methods, by simply mowing the fields of grass and weeds. The soil was dead enough that the grass clippings would sit on the surface for months without decomposing. “We knew [then] that we needed biology,” she says. “And livestock is the gateway to all that goodness.” Instead of mowing, the animals could eat the grass and weeds, run them through their digestive systems, and create high-quality manure for the same fields. “It just really jumpstarts life in the soil again,” she says.

Every animal at Slow Farm contributes to the greater project of land restoration and farm management through what they eat or hunt. Turnip and Potato are livestock guardian dogs who keep the perimeters safe from predator animals. A flock of guinea fowl are also “teammates.” “They're basically like tick Roombas,” laughs Rachel. “They just sort of zip around and eat ticks and fire ants, and that’s fantastic.” She explains that fire ants can hurt newborn farm animals, and so she relies on the guineas to protect other livestock. A small herd of brush goats manage the farm’s scrubs, vines, and sapling trees. They eat from as high up as they can reach on their hind legs, down to about 18 inches from the ground. “And evolutionarily that's brilliant, because that's where their intestinal parasites live,” she explains. “So if you make them graze lower, you're going to have major parasite issues.”

Left in this 18-inch “buzz cut” of grass were weeds like dock and dandelion. Rachel realized that pigs would be keen to work over the weeds in the fields as part of their regular diet, which meant she could avoid using herbicides. But there was a problem. “Pigs are rototillers on feet,” she says. “They can root two feet down. If your project is to restore topsoil, you do not want to disrupt the root mat that you're trying to develop and the mycelial network you're trying to encourage to come back.” She started doing research online, and that’s how she heard about Kunekune pigs. “Kunes are sort of exploding in popularity, both in the science community and also in the farming community, as farmers figure out that there is another way to do pigs, there's another way to do pork,” she says. “This is the most eco-friendly pork you could possibly produce.”

Kunekunes are small, maybe about half the size of a commercial pig. They can eat a lot of grass and weeds, and so they need only a small amount of supplemental grain. “They’ve got really efficient metabolisms so they can actually get nourishment from plant matter in a way other pigs cannot,” Rachel says. “They were bred to have short noses, so they don't till the soil.” She is effusive over Kunekunes, calling them “physical marvels” and “the perfect grazing pig.”

Closely associated with the Māori people of New Zealand, Kunekunes were bred for their docile temperaments as well as their meat and lard. “I grew up with the big 700-900 pound white York pigs and I've got the scars on my back to prove it,” recalls Rachel. “They're tough business…I never thought I'd be a crazy pig lady. But the Kunes have made me a crazy pig lady.” Because of their cultivation as village pigs by the Māori, the furry and friendly Kunekunes stick close to home and don’t try to get through fences. “We have our teenage pigs do something I call Free Range University,” she says. “When they're teenagers, they get to be out free-ranging the whole 47 acres. This makes them really smart, savvy, grazers, but it also lets us socialize them in a different way.”

At one point in the 1980s there were only around 50 purebred Kunekunes in existence. A conservation association in New Zealand was able to help bring the breed back, and since the 1990s, they’ve grown in popularity in the U.S. Slow Farm now breeds and sells registered and pedigreed Kunekune pigs, but only on a small scale. “Kunes are fantastic pork,” Rachel says. “I'm happy to support farmers who want to raise Kune meat for their own consumption, or Kunes on a small-scale for resale or whatever. Everybody's got their own farming path to pursue, and I'm here for it.”

However, Rachel is admittedly picky about who she sells to. She recalls reading research on Kunekunes at the University of Vienna that outlined the heavily social nature of the breed. For this reason, she only sells piglets in sets of two, and will not sell to a confinement setting. “I'm not afraid to turn somebody down for the pigs if they're not a good fit or their setup isn't the right fit,” she says. “They're not going to thrive in that setting.” Slow Farm is partially an educational farm, and Rachel acts as a Kunekune resource through workshops, blog posts, and group tours. “I always joke – but I'm not joking – that all my piglets come with tech support,” she says. “Anybody with a Slow Farm pig can text me at any time and get some guidance on this or that.”

After six years at Slow Farm, through this program of animal-managed soil regeneration, Rachel has started to see some improvements to the land. There’s still a lot to do. But she welcomes the challenge. “Everything we do is a slow process,” she says. “That's why we decided to call it Slow Farm. And when I'm out there, and I just get impatient like everybody else does, I'm like, ‘Wait a minute. This is Slow Farm. I'm the Slow Farmer. Take a breath, lady.’ So it's a useful name that way.”

Listen to the story on this episode of Earth Eats.