A new waterways definition could put farmers and environmentalists at odds 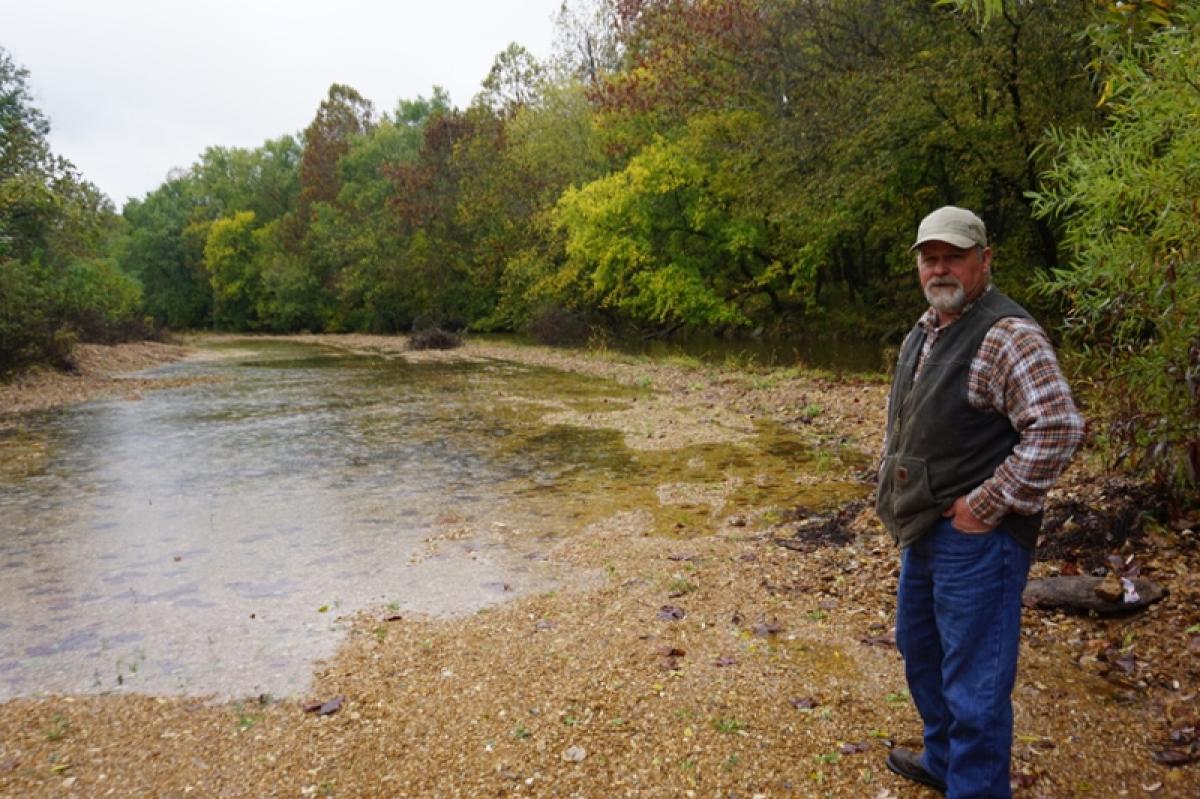 Missouri Farmer Chris Brundick stands near a low-lying area on his Maries County farm that he is concerned could be classified as a "Water of the United States" and put more restrictions on his ability to farm. (Jonathan Ahl / Harvest Public Media)

Chris Brundick looks at a few inches of water running through a low lying strip of land on his 450 acres in south central Missouri and sees a ditch.

“This is hardly a creek, and this, in my opinion, should not be classified as a Water of the U.S.,” Brundick said.

The federal government's definition of a body of water is in play again, after back-and-forth regulations from the Obama and Trump administrations and less-than-decisive court cases.

Environmentalists say even places like Brundick's ditch feed into streams that feed into rivers and lakes. So they say regulations about how much fertilizer, pesticides and silt gets into those soggy areas ought to be regulated.

Farming interests find that absurd and suggest that if it's not something you can navigate in a boat, it shouldn’t fit into definitions laid out in the Waters of the United States.

The Obama administration widened the definition to include so many waterways that farmers complained ditches that were dry 11 months of the year were suddenly covered by Clean Water Act provisions that limited their ability to plant crops and raise livestock on portions of their farms.

The Trump administration attempted a massive rollback of the Waters of the United States definition. While it ended up in court and was partially reversed, the result was that many creeks, streams and wetlands fell outside federal clean water regulations.

Brundick worries that the Biden administration will reinstate many of those waterways, and jeopardize his farm.

“If you start eliminating these acres that are sitting behind us right now, enough of this is going to create enough of an impact that it’s going to create more (crop) shortages,” Brundick said. “Fewer acres means less food and higher prices.”

That definition would be rivers and lakes that can carry boat traffic. Some environmentalists say that’s far too narrow.

“We need to make sure that we are protecting all the Waters of the United States, not just the ones that people can boat in,” said Jen Pelz, a biologist and attorney with the environmental group WildEarth Guardians.

Pelz said it may be tempting to exclude a ditch that is dry 11 months out of the year, but it is still a critical part of the bigger water system.

Pelz testified to the EPA that the rules should go back to the pre-2015 definition, and the Obama administration’s changes sought to clarify things but actually limited protections under the Clean Water Act. She is also concerned the Biden administration may be too willing to compromise with agribusiness.

But some environmentalists are willing to seek middle ground.

“As an environmentalist,” said Jim Karpowicz with the Missouri Coalition for the Environment, “I’d like to be on the practical side of the fence, and be able to take steps that can get done in order to initiate them immediately.”

But compromise does not seem to be in the cards.

David Aiken, a professor of agricultural economics at the University of Nebraska, said don’t count on a compromise:

“I don’t know that there is a needle to thread that would avoid all court challenges,” said David Aiken, a professor of agricultural economics at the University of Nebraska. “This is just such a controversial issue. It’s going to end up before the Supreme Court, ultimately.”

Aiken said part of the problem is that Congress has not weighed in on the matter for more than 30 years. Legislation from 1985 set a definition for Waters of the United States, but since then it has been changed by presidential administrations.

A sharply divided Congress is not likely to take up another controversial issue that it can avoid, especially with bigger issues on its plate.

That angers Chris Brundick. He feels like he’s been watching a ping pong match being played with the waterways definition.

“We never know with clarity what the rule is, and we need something permanent,” he said. “And we need Congress to do this, but it’s just not a topic they want to pick up.”

In the meantime, the U.S. Environmental Protection Administration and the Army Corps of Engineers are planning a series of virtual roundtables in December and January on what the rules should be on what makes something a Water of the United States.