Naked Hemingway, Spanish Guitar, And The Charm Of The Handmade

Why did a literary critic hold on to a nearly nude photo of Hemingway for decades? Plus, the Petar Duarte Guitar Duo, and the Artisan Guilds Holiday Show. 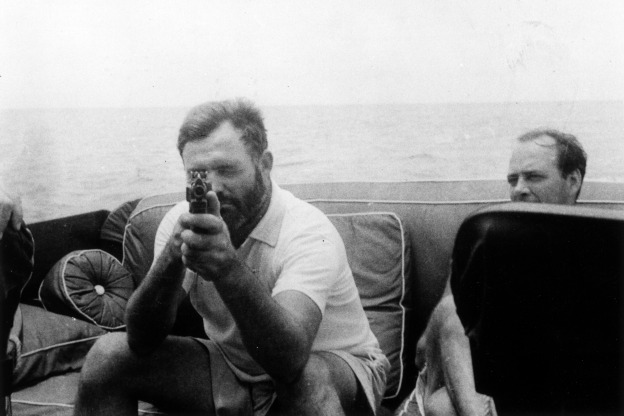 Ernest Hemingway Aboard the Pilar, 1935

Even if you haven’t read his books, Ernest Hemingway’s reputation precedes him–

“This kind of virile, swaggering dude,” avers professor and biographer Christoph Irmscher, “somebody who’s known for these feats of masculinity, being a war correspondent, a big game hunter, the kind of daring that’s also in his novels.

So what happens when his work is criticized for false bravado? As in the words of Max Eastman: “A literary style, you might say, of wearing false hair on the chest.”

In the debut of  her series Archival, producer Allison Quantz traces the connection between literary emasculation and a nearly-nude photograph of Hemingway long stashed in Indiana University’s Lilly Library to tell a story of pride, manliness, and how tough it can be to buck the norm.

Hemingway spent many years in Spain, the setting for his novel For Whom the Bell Tolls. Spain is also an inspiration for the Petar Duarte Guitar Duo. IU Jacobs School faculty Petar Jankovic and Daniel Duarte have recently teamed up to perform Spanish, Latin American, and Balkan repertoire, representing their respective nationalities and collective taste. We dropped in on their visit with George Walker in the WFIU studios this week to catch their performance of a contemporary Brazilian piece, in anticipation of their performance with the IU Guitar Ensemble November 12.

And it wouldn’t be the first weekend in November without the Artisan Guilds of Bloomington Holiday Show. This year’s show features 70 plus artists working in clay, glass, and fiber and runs November 4th from 4 to 9 pm and November 5th from 9 am to 5 pm at the Bloomington/Monroe County Convention Center.  Along with local artwork for purchase, the show features educational exhibits and demonstrations including an exhibit of tools, weaving, spinning, pottery throwing, and a mineral display. We revisit a conversation with a glassblower, a fiber artist, and a couple of potters from the first year their guilds teamed up about value of the hand-made object.

This naked photo of Hemingway means a lot more than you might think.

This year for the first time, three local artisan guilds join forces to create a destination for those seeking one-of-a-kind gifts in glass, clay, and fiber.