This week on the show, I’ll be exploring the theme of color in the Great American Songbook. Whether you are red with passion, green with envy or feelin’ kind of blue, colors have a way of highlighting a phrase or providing different shades of meaning. Naturally, the Great American Songbook is bursting with color, providing warmth, tone, and vibrancy to a musical phrase. This hour, we will travel across the entire spectrum of color in traditional American Popular Song, from “Red Sails In The Sunset” all the way to “Deep Purple,” and everything in between.

It’s “My Coloring Book: Colors In Popular Song”, coming up next on Afterglow

Barbra Streisand in 1962 performing the John Kander and Fred Ebb tune “My Coloring Book.” This was one of Streisand’s early commercial successes and the tune was later performed by Aretha Franklin, Sarah Vaughan, and Julie London. It was also a breakout song for the songwriting duo Kander and Ebb. Although Kander and Ebb had success on Broadway with Cabaret and Chicago, “My Coloring Book” was not from a musical. In fact, it was one of their first songs as collaborators. The song is clearly one big metaphor, but I especially love some of the finer details in Fred Ebb’s lyrics, like the moment we learn that there was another woman, and the envious color green appears.

Mark Chilla here on Afterglow. On this show, we’re exploring the coloring book of popular song, finding out how different colors paint the words of the Great American Songbook.

To start our musical spectrum, let’s take a look at the color red. Red is the color of passion, the color of courage, and the color of courtly love. It’s the color of songs like “My Love Is Like A Red, Red Rose,” “The Lady In Red,” and “Red, Red, Wine.” So, to kick things off, here are two red songs from the Great American Songbook (plus a rose-colored song for good measure), beginning with a Harry Woods tune that dates back to 1926.

This is Carmen McRae with “When The Red, Red Robin (Comes Bob, Bob, Bobbin’ Along),” on Afterglow.

Some rose and red from the Great American Songbook. Just now we heard Frank Sinatra and Count Basie with “Looking at the World Thru Rose-Colored Glasses,” a song by Jimmy Steiger and Tommy Malie. Before that, Nat King Cole in 1951, with his revival of the 1935 Irish tune “Red Sails In The Sunset.” And starting that set, the Harry Woods song “When The Red, Red Robin (Comes Bob, Bob, Bobbin’ Along),” sung by Carmen McRae in 1958.

After red, we turn to orange. They say nothing rhymes with orange. Perhaps that’s why of all the colors of the rainbow, orange shows up probably the least in the Great American Songbook. Some songwriters were up to the challenge, though, including Milton DeLugg and Willie Stein in 1950 with their song “Orange-Colored Sky.” The song first showed up on a late-night NBC show in 1950, and became one of the first songs to become a hit thanks to television expose. A number of well-known singers recorded it that year, including Nat King Cole, Danny Kaye with Patty Andrews, and this next singer, Doris Day.

Here is Doris Day with the Page Cavanaugh Trio in 1950 with “Orange-Colored Sky,” on Afterglow.

Moving on from orange, we turn to yellow songs in the Great American Songbook. Now, yellow is complicated. It’s the color of cowardice, but it’s also bright and warm. Yellow can be a mystery, which is why it takes on a mysterious quality in this next song.

Here is Mel Tormé in 1960 from a moon-song concept album performing the Fred Ahlert and Edgar Leslie tune “The Moon Was Yellow,” on Afterglow.

Nat King Cole from the 1958 album St Louis Blues performing the W.C. Handy song “Yellow Dog Blues.” “Yellow Dog,” by the way, was the nickname given to the Yazoo-Delta Railway that ran through Mississippi, an important historical touchstone in the history of the Mississippi Delta Blues. Before that, the Fred Ahlert and Edgar Leslie tune “The Moon Was Yellow,” sung by Mel Tormé in 1960 from his moon-song concept album Swingin’ On The Moon.

And on from yellow, we turn now to green. Green is the color of envy, yes, but it’s also the color of life, youth, nature, and spring. And it’s that definition of green that inspired the wide-open spaces of the Rodgers and Hart tune “Mountain Greenery” from 1926. This song is classic Larry Hart, with intricate rhymes like greenery, scenery, beanery and keener re-ception.

To kick off this keen green set, this is Bing Crosby with Buddy Bregman’s Orchestra in 1956 with “Mountain Greenery,” on Afterglow.

Before that, Anita O’Day in 1961 with the Paul Coates and Bernie Hanighen tune “If The Moon Turns Green”— That song is sort of the halfway point between a song we heard earlier, “The Moon Was Yellow” and the famous Rodgers and Hart song “Blue Moon.”

And starting that set, Bing Crosby with Rodgers and Hart’s “Mountain Greenery.”

Coming up after a short break, we’ll continue chasing rainbows and we explore more colors in popular song, stay with us.

Welcome back to Afterglow, I’m Mark Chilla. We’ve been exploring colors in popular song this hour. So far, we’ve heard from the colors red, orange, yellow, and green. And now it’s time to turn to that ever-so-ubiquitous color in American music history: blue.

Blue is by far the most common color mentioned in the Great American Songbook. Given that so much of American music is rooted in the blues, it comes as perhaps no surprise. I’ve even devoted an entire show to songs about the color blue without ever playing a piece written in your standard 12-bar blues. That’s how common “blue” is.

I’m going to play now two blue songs that I did not feature on that blue episode. And just like I did with that entire blue episode, neither of these songs are 12-bar blues, but rather about the color itself.

First up, here is Tony Bennett in 1951 with the original version of the Bernie Wayne and Lee Morris tune “Blue Velvet,” on Afterglow.

[MUSIC - ELLA FITZGERALD AND LOUIS ARMSTRONG - “UNDER A BLANKET OF BLUE”]

Ella Fitzgerald and Louis Armstrong together in 1956 performing “Under a Blanket of Blue” a song written by Jerry Livingston, Marty Symes and Al J. Neiburg back in 1933. Before that, Tony Bennett in 1951 with “Blue Velvet,” the first version of that song.

As we trip along the rainbow of colors, ROYGBIV, after blue comes indigo. This lovely deep blue color is the most frequently overlooked color from the rainbow. But luckily, it’s been given some exposure in a classic song from the Great American Songbook, Duke Ellington’s “Mood Indigo.”

Irving Mills wrote the lyrics are beautifully written here. If indigo is a deep blue, then “mood indigo” is a deeper, more intense version of the blues. “You ain’t been blue, til you’ve had that mood indigo.”

Here’s a brilliant version of that song now, from a concept album of all torch songs. This is Frank Sinatra in 1955 from the album In The Wee Small Hours with “Mood Indigo,” on Afterglow.

Frank Sinatra in 1955, with a classic version of the Duke Ellington, Barney Bigard, and Irving Mills song “Mood Indigo.” Nelson Riddle was the arranger in that recording.

We move on from indigo to our final hue of the rainbow, your violets and purples. Purple is the color of royalty, but to describe something as “purple” could mean it’s flowery, complex, or ambiguous. In the Great American Songbook, the most famous purple song adds an extra layer of ambiguity, because it’s not just “purple” but “Deep Purple.”

The song “Deep Purple” was originally a piano melody written by Peter DeRose in 1933. It was apparently Babe Ruth’s favorite song. The song became so popular that lyricist Mitchell Parrish added words to it in 1939. It’s hard to tell exactly what DeRose meant when he called his melody “Deep Purple,” but Parrish uses the color to describe those last flickers of twilight, where reality blends into a dream world.

Here’s one of the first vocal recordings of this piece back in 1939. This is Artie Shaw and his Orchestra, featuring Helen Forrest with “Deep Purple,” on Afterglow.

Well, we’ve traveled across the color spectrum all the way from “Red Sails in the Sunset” to “Deep Purple.” Our once monotone musical world has been filled with greens and blues, yellow and indigo. And what better way to end this hour of colorful music with a song that describes the feeling of awakening to a world of color.

To close things off, here is Ella Fitzgerald in 1958 performing the Irving Berlin tune “I Used To Be Color Blind,” on Afterglow.

[MUSIC - ELLA FITZGERALD - “I USED TO BE COLORBLIND”]

Irving Berlin’s 1938 song “I Used To Be Color Blind” performed their by Ella Fitzgerald in 1958.

And thanks for tuning in to this colorful edition of Afterglow, looking at colors in popular song.

[MUSIC CLIP - OSCAR PETERSON, "I USED TO BE COLORBLIND"] 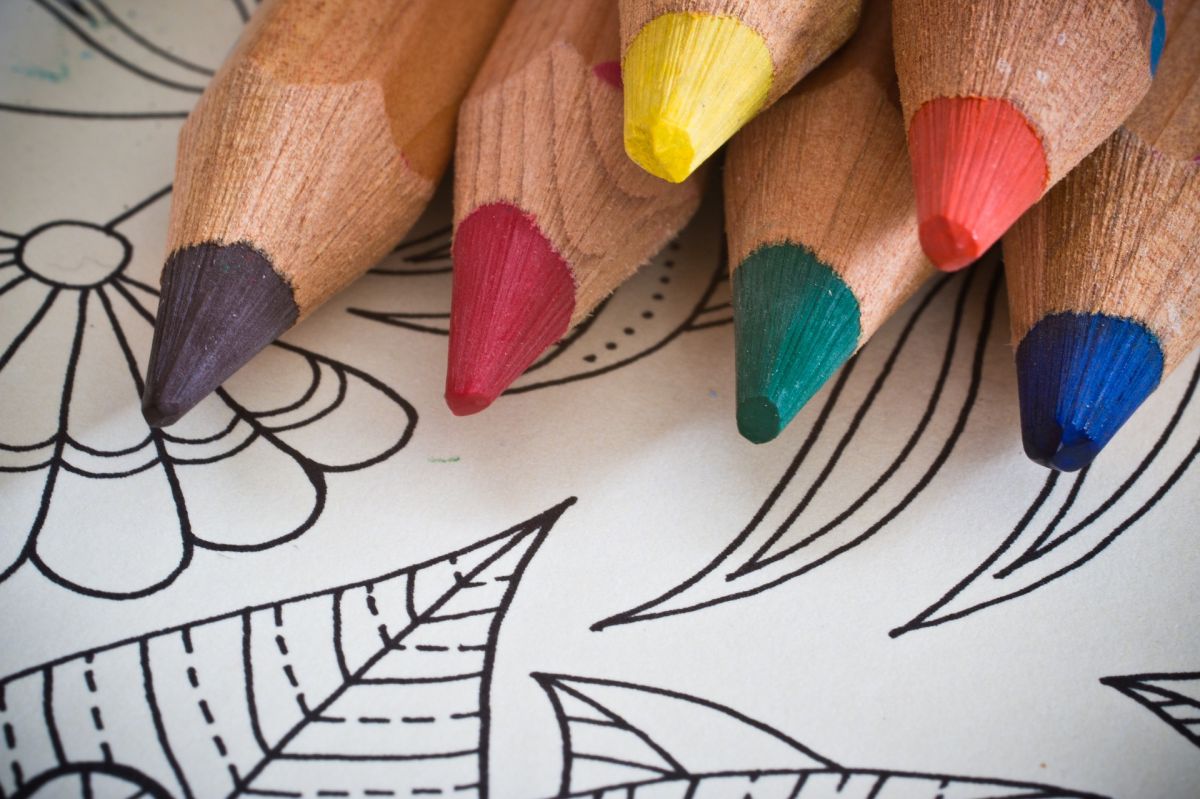 "Orange-Colored Sky," "On Green Dolphin Street," "Blue Velvet," "Mood Indigo," and other colorful songs, this week on the show. (Pixabay)

This week on the show, I’ll be exploring the theme of color in the Great American Songbook. Whether you are red with passion, green with envy, or feelin’ kind of blue, colors have a way of highlighting a phrase or providing different shades of meaning. Naturally, the Great American Songbook is bursting with color, providing warmth, tone, and vibrancy to a musical phrase. This hour, we will travel across the entire spectrum of color in traditional American Popular Song, from “Red Sails In The Sunset” all the way to “Deep Purple,” and everything in between.

Color Songs Featured on this Episode:

Did we miss your favorite color song? Find WFIU's Afterglow on Facebook or Twitter and let us know!