On an earlier episode of this very program, I explored the world of colors in popular song—everything from “Red Sails In The Sunset” to “Deep Purple.” However, there are many more jazz standards that explore the color wheel. So this week, I’ll be taking an even deeper dive, exploring all the colors of the rainbow, plus some color songs outside of the regular spectrum, so to speak, like “Little White Lies” and “That Old Black Magic.” Coming up, we’ll hear color songs by Tony Bennett, Anita O’Day, Ella Fitzgerald and more.

It’s Chasing Rainbows: More Colors In Popular Song, coming up next on Afterglow

MUSIC - TONY BENNETT, "OVER THE RAINBOW"

Two rainbow songs from Tony Bennett. Just now, we heard him in 1962 with the old 1917 vaudeville number “I’m Always Chasing Rainbows,” and before that, Bennett in 1961 with Harold Arlen and Yip Harburg’s “Over The Rainbow.”

Mark Chilla here on Afterglow. On this show, we’re chasing rainbows as we explore colors in American popular song. Last time we did a show like this, we started on the low end of the spectrum with the passionate color red, so let’s start there again.

We’ll kick things off with Anita O’Day, alongside the Gene Krupa Orchestra in 1941 with the tune “Stop, The Red Light’s On,” on Afterglow.

Ella Fitzgerald with a Verve single from 1958. That was the Gene De Paul and Don Raye tune “Your Red Wagon.” Before that, King Pleasure and Betty Carter in 1952 with the Prestige single “Red Top,” a Lionel Hampton tune. And starting that red set, Anita O’Day in 1941 during her stint with Gene Krupa’s orchestra and “Stop, The Red Light’s On.”

From red we move to orange, a color that’s a little more elusive in the Great American Songbook. Of course, you have this familiar Nat King Cole song from 1950, which I mentioned in my last color episode…

And while that’s really the only “orange” standard I could think of, we have other songs that feature other orange-adjacent hues. Like this next song, which also describes the orange shades of the sky.

Here is Bing Crosby way back in 1932 with one of his signature tunes, “Where The Blue of The Night (Meets The Gold Of The Day),” on Afterglow

MUSIC - BING CROSBY, “WHERE THE BLUE OF THE NIGHT (MEETS THE GOLD OF THE DAY)”

Bing Crosby in 1932 with a “golden” song he co-wrote, “Where The Blue Of The Night (Meets The Gold Of The Day).” That was a big seller for Crosby back in the 30s, but not quite a gold record—not only did it not sell over a million copies, like his other color-themed record “White Christmas,” but gold records weren’t officially given out by the Recording Industry until a decade later.

From gold we move to yellow. Just like the color “gold” played a role in a Bing Crosby original song early in his career, the color “yellow” played a role in an Ella Fitzgerald song early in her own career. Ella Fitzgerald’s original song “A-Tisket, A-Tasket,” based on a nursery rhyme about a girl and her lost yellow basket, helped make the singer a household name in 1938. The success of this tune even prompted a follow-up single later that year called “I Found My Yellow Basket.”

Ella Fitzgerald and Chick Webb’s Orchestra in 1938 and the tales of a stolen yellow basket. That was “A-Tisket, A-Tasket,” her hugely successful single, and “I Found My Yellow Basket,” her much less successful follow-up.

Coming up in just a moment, we’ll hear more songs exploring the colors of the rainbow. Stay with us.


Welcome back to Afterglow, I’m Mark Chilla. We’ve been chasing rainbows this hour, exploring songs all along the color wheel. And now we turn from the golden hues of saffron yellow to the lively tint of emerald green.

I’ll start out this second half of the show with a song about longing for that green of spring from the point of view of someone in the autumn of their years. This is Frank Sinatra from the 1965 Grammy-award-winning album September Of My Years with “When The Wind Was Green,” on Afterglow.

MUSIC - FRANK SINATRA, “WHEN THE WIND WAS GREEN”

The quintessential song about the color green, sung by Tony Bennett and his amphibious friend Kermit The Frog. That was “Bein’ Green,” written by Sesame Street songwriter Joe Raposo, and that comes from Bennett’s 1998 children’s themed album The Playground. Before that, we heard Frank Sinatra in 1965 from his much more adult themed album September Of My Years with the song “When The Wind Was Green.”

From green we turn to blue, a color that is so saturated in the Great American Songbook that I gave it its own episode. But, I’ll still play one blue song for you now. This is the trio Lambert, Hendricks, and Ross with a deep indigo hued version of a song simply titled “Blue” on Afterglow.

Lambert, Hendricks and Ross, from their 1962 album High Flyin’ with the song “Blue,” written by the trio’s regular pianist Gildo Mahones.

As we traverse the colors of the rainbow, we move from the deep blues and indigos of that last tune to violet. The name of this bright purple hue comes from the violet, a delicate purple flower. So, let’s hear a song now written about that flower being used as a gift.

Here is Frank Sinatra again, in 1954 from his first Capitol LP, Songs For Young Lovers, with the Matt Dennis and Tom Adair song, “Violets For Your Furs,” on Afterglow

Frank Sinatra from his 1954 album Songs For Young Lovers with the Matt Dennis and Tom Adair song “Violets For Your Furs.” Dennis and Adair originally wrote that song back in 1941 for Frank Sinatra, when he was singing with Tommy Dorsey’s orchestra.

Although we’ve moved all the way around the spectral colors of the rainbow, there are other colors in songs that we have not addressed, you blacks, whites, browns, and greys. While these colors might not be as luminous as the reds, yellows, and blues, they still shine brightly in American popular song. So here are a few.

I’ll start with Sammy Davis Jr. with the Harold Arlen and Johnny Mercer classic, “That Old Black Magic,” on Afterglow.

Aretha Franklin in 1963, with an unreleased song from her Columbia Years. That was Billy Strayhorn’s “My Little Brown Book.” Before that, we heard Ella Fitzgerald on the 1958 album Ella Swings Lightly with Walter Donaldson’s “Little White Lies.” And starting that set, Sammy Davis Jr. in 1955 for Decca Records with Harold Arlen and Johnny Mercer’s “That Old Black Magic.”

We’ve heard from red, yellow, black, white, and everything in between on this colorized episode of the show this hour. And I have one more multi-colored tune for you. It’s actually a bit of a medley. It comes from jazz singer Beverly Kenney, combining two rainbow songs for the price of one. Framing the song, we have “Sing A Rainbow,” a simple nursery rhyme of a song originally sung by and written for Peggy Lee in the film Pete Kelly’s Blues in 1955. And tucked in the middle, you have Yip Harburg and Burton Lane’s “Look To The Rainbow,” from the 1947 musical Finians Rainbow.

Here’s Beverly Kenney in 1957 with her version of “Sing A Rainbow,” on Afterglow.

Beverly Kenney, with pianist Ellis Larkins on the celeste, in an unreleased Decca recording from 1957, combining the songs “Sing A Rainbow” and “Look To The Rainbow.”

And thanks for singing a rainbow with me this hour, as we’ve explored colors in popular song, on Afterglow. 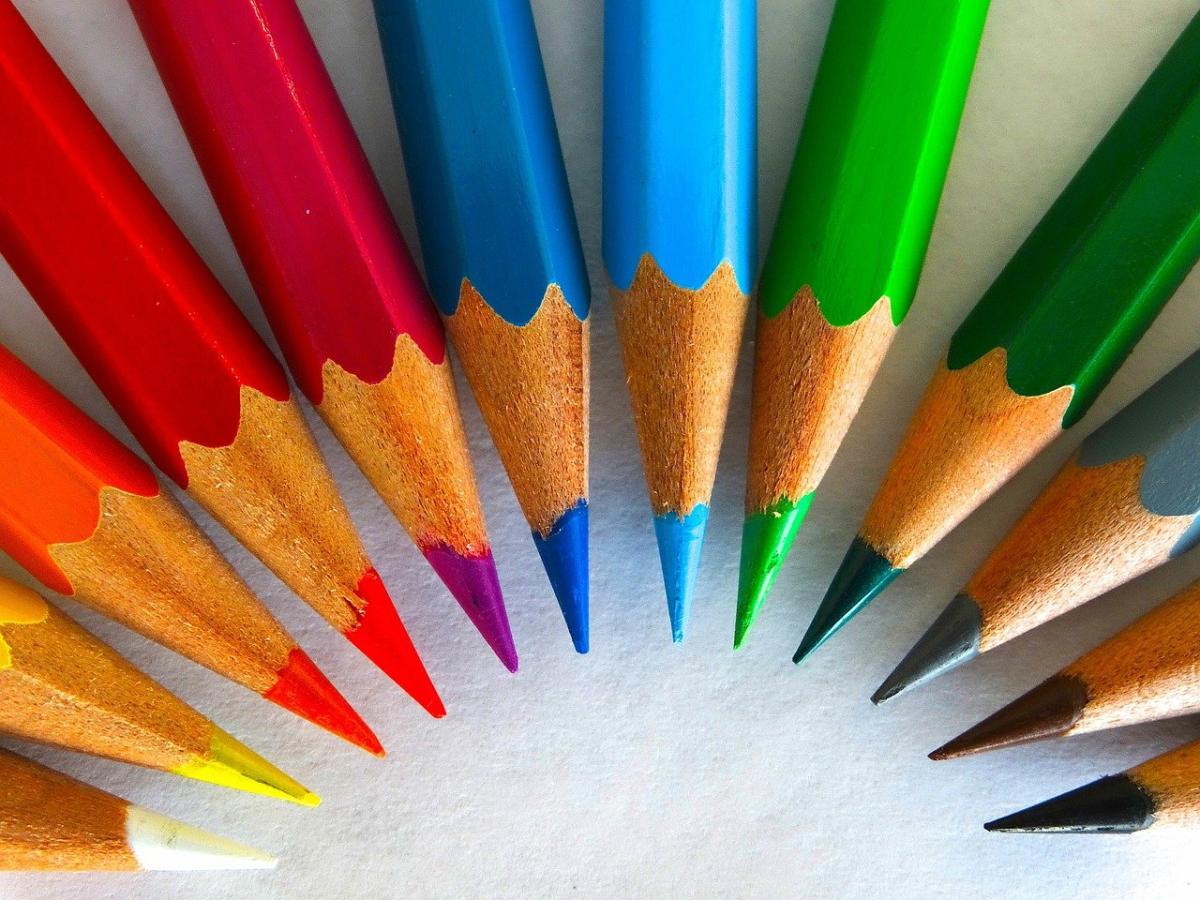 On an earlier episode of this very program, I explored the world of colors in popular song—everything from “Red Sails In The Sunset” to “Deep Purple.” However, there are many more jazz standards that traverse the color wheel. So this week, I’ll be taking an even deeper dive, exploring all the colors of the rainbow, plus some color songs outside of the regular spectrum, so to speak, like “Little White Lies” and “That Old Black Magic.” On this hour, we’ll hear color songs by Tony Bennett, Anita O’Day, Ella Fitzgerald and more.

Color Songs Featured on this Episode:

Listen to our earlier colorful episode, featuring songs like "Red Sails In The Sunset," "Mood Indigo," and "Deep Purple."

Did we miss your favorite color song? Find WFIU's Afterglow on Facebook or Twitter and let us know!