For centuries, poets, artists, and musicians have been looking up to the “moon” for artistic inspiration, an activity that shows no sign of slowing down. So naturally, the “moon song” is a popular and familiar kind of song that shows up in the Great American Songbook. It’s so familiar that I’ve actually already put together an entire hour devoted to moon songs before on Afterglow. This hour, I’ve decided to dive even deeper into the moon song catalog, uncovering some songs that I may have missed, from the well-known to the, perhaps, unknown, all sung by some favorite singers.

It’s Moonlight Serenades, coming up next on Afterglow

Two different takes on the same subject, the blue moon. First up, we heard Tony Bennett with the familiar Richard Rodgers and Lorenz Hart song “Blue Moon,” written in 1934. Bennett performed it there in 1973, with the original opening verse, for his Rodgers and Hart songbook album, backed by The Ruby Braff / George Barnes Quartet. Just now, the underrated singer Frank D’Rone in 1959 on his debut album, with the song “The Moon Is Blue” by Herschel Burke Gilbert and Sylvia Fine, a song that was nominated for an Academy Award in 1953.

Mark Chilla here on Afterglow. On this show, we’re looking up at the moon, exploring some songs about our lunar companion. Will songwriters ever run out of things to say about the moon? It’s a place of wonder, a place to hang our hopes and dreams, a source of light in the darkness. And for much of the twentieth century, when much of what we call the Great American Songbook was being written, it was a place that was seemingly out of reach.

This is actually the second hour I’ve put together on this topic. I found that the last time I made an episode about moon songs, I had to leave many songs on the cutting room floor. In fact, as I’ve put this episode together, there were even more songs about the moon that I had to omit for time. Will I put together a third hour about the moon? Time will tell.

Here’s a song now that didn’t quite make it onto that original show. This one is quite the remarkable tune, especially when you add in the original verse, which helps contextualize the meaning behind the song. It’s a song about the moon, yes, but it’s really a song about love and metaphor, and our need to use fantastical imagery to convey the simple and profound. The song was originally titled “In Other Words” by its songwriter Bart Howard, but we know it today more commonly by its opening line “Fly Me To The Moon.”

Here is Tony Bennett in 1965 with his version of “Fly Me To The Moon,” on Afterglow

MUSIC - TONY BENNETT, “FLY ME TO THE MOON”

Tony Bennett with Bart Howard’s song “Fly Me To The Moon” aka “In Other Words.” Howard wrote that song over a decade before that particular recording, and despite great versions by Kaye Ballard, Eydie Gorme, and Johnny Mathis, the song never caught on until 1960 when it was performed by Peggy Lee. Lee also suggested to Howard to stick with the name “Fly Me To The Moon.” In the 1960s, a famous swingin’ version by Frank Sinatra became associated with the Apollo moonshot mission.

Our next moon song performer is the one and only Billie Holiday. Holiday sang many moon songs over the course of her career—she’s particularly well-known for the second song we’ll hear in this set. But first, let’s feature a classic song written in 1933 by Will Hudson, Irving Mills, and Eddie De Lange. This particular tune is also the theme music I use for Afterglow.

Here is Billie Holiday in 1952 with the song “Moonglow,” on Afterglow.

Two moon songs sung by Billie Holiday. Just now, one of her signature song “What A Little Moonlight Can Do” by Harry M. Woods. Holiday first performed that back in 1935 along with Teddy Wilson. This recording came from 1954, featuring the Oscar Peterson Trio and trumpeter Charlie Shavers. Before that, another recording from Holiday, the Oscar Peterson Trio, and Shavers, this time from 1952. That was the song “Moonglow.”

More moon songs coming your way now. Both of those last two songs originally date back to the mid 1930s (1933 and 1934, in fact). Same thing goes for these next two, both from 1934. Not sure if there was something particular about this time in American life that inspired moon songs—maybe something about the Great Depression or Dust Bowl had people pinning their hopes to the moon? In this next song in particular, the moon is associated with a simpler, more provincial lifestyle.

Here's Hoagy Carmichael and his Orchestra in 1934 with a song he co-wrote with Johnny Mercer—the song “Moon Country,” on Afterglow.

MUSIC - LOUIS ARMSTRONG, “EAST OF THE SUN (WEST OF THE MOON)”

Louis Armstrong and Russ Garcia’s Orchestra in 1957 with the song “East Of The Sun (West Of The Moon).” That song was written in 1934 by songwriter Brooks Bowman, his one and only jazz standard, which he wrote while he was enrolled in Princeton University. He tragically died in a car crash only a few years later, before his songwriting career ever took off. Before that, another song from 1934. That was “Moon Country,” by Hoagy Carmichael and Johnny Mercer, sung there by Carmichael that very same year.

Johnny Mercer had a lifelong obsession with the moon. He wrote, or at least drafted, over 20 songs with “moon” in the title, according to his archives at Georgia State University. Many of these songs evoke the imagery of an idyllic, pastoral south, where he grew up. That was certainly the case for “Moon Country,” and it’s also true of this next popular moon song, written over 25 years later.

Here is singer Nancy Wilson in 1963, with the Johnny Mercer and Henry Mancini song “Moon River,” on Afterglow.

A great little tune about traveling to the moon. That was Dinah Washington in 1962 with “Destination Moon.” That song was, in fact, written over a decade earlier in 1950 by songwriters Marvin Fisher and Roy Alfred, and first performed by Nat King Cole that year. The song likely drew inspiration from the film Destination Moon, which also came out in 1950. That film was one of the first to address the practicalities of actually getting to the moon—something which became a reality almost two decades later.

Before that, we heard a more familiar moon song, the classic “Moon River,” written by Henry Mancini and Johnny Mercer for the 1961 film Breakfast At Tiffany’s and sung there in 1963 by Nancy Wilson. That song earned Mancini and Mercer an Academy Award and TWO Grammy Awards.

Coming up in just a bit, we’ll have more moonlight serenades from the American Songbook. Stay with us.

Welcome back to Afterglow, I’m Mark Chilla. We’ve been exploring songs about the moon this hour, some “moonlight serenades,” if you will.

And now I want to turn my attention to one of the more famous “moonlight serenades,” the song “Moonlight Serenade” written by Glenn Miller, which you’re hearing right now.

It’s one of Miller’s most signature tunes, and one of the most recognizable tunes from the swing era, a romantic, slow dance classic. The song was part of Miller’s repertoire in 1935 before it even had a title, when it was simply called “Miller’s Tune.” It was finally recorded in 1939 as the B-side to a record called “Sunrise Serenade” (hence the new title “Moonlight Serenade”), and it became particularly associated with wistful GI’s during World War II, longing to be slow dancing with their sweethearts back home.

Although it’s primarily known as an instrumental, lyricist Mitchell Parish added words to the song after its initial release in 1939. Let’s hear a version now.

This comes from 1965 off of the moon-song themed album Moonlight Sinatra. Here is Frank Sinatra with Glenn Miller’s “Moonlight Serenade,” on Afterglow.

From the 1965 album Moonlight Sinatra, that was Frank Sinatra with “Moonlight Serenade” by Glenn Miller and Mitchell Parish. We’ll hear some more from that album a little later.

Sinatra wasn’t the only one who recorded a moon-themed album in the 1960s, when the moon seemed to be on everyone’s mind. Five years earlier, Mel Tormé recorded his own album of moon songs called Swingin’ On The Moon, which featured some familiar tunes like “Moonlight In Vermont” and “Blue Moon,” as well as some less familiar tunes, like these next two.

First up, here is Mel Tormé in 1960 with a recipe for a “Moonlight Cocktail,” a tune by Luckey Roberts and Kim Gannon, on Afterglow.

MUSIC - MEL TORMÉ, “DON’T LET THAT MOON GET AWAY”

Two, perhaps, less familiar songs about the moon, both from the 1960 album Swingin’ On The Moon. First up, that was “Don’t Let That Moon Get Away” written by James Monaco and Johnny Burke back in 1938. Before that, “Moonlight Cocktail” by Luckey Roberts and Kim Gannon, a swing tune from 1942.

Lyricist Johnny Burke, who wrote the words to that last song “Don’t Let That Moon Get Away,” composed several moon songs, in fact, including that song “Moonlight Becomes You,” “Oh, You Crazy Moon,” “Polka Dots And Moonbeams,” and this next song.

Here is Frank Sinatra again from his 1965 album Moonlight Sinatra with the Arthur Johnston and Johnny Burke song “The Moon Got In My Eyes,” on Afterglow.

MUSIC - FRANK SINATRA, “THE MOON GOT IN MY EYES”

Chris Connor in 1958 with the Karl Suessdorf and John Blackburn song “Moonlight In Vermont.” Before that, Frank Sinatra in 1965 with “The Moon Got In My Eyes.”

The moonlight seems to be inherently romantic. Think about all the romantic songs about the moon we’ve heard this hour: “Moonlight Serenade,” “What A Little Moonlight Can Do,” “Moonglow.” The moon, at least in the American songbook, seems to often light the way to love… But can the moon actually get in the way? That’s the question posed in this final moon song I’ll play for you this hour.

Here is singer Jeri Southern in 1956 with David Mann and Redd Evans song “No Moon At All,” on Afterglow

MUSIC - JERI SOUTHERN, “NO MOON AT ALL”

A moonless song to end our moon show… that was Jeri Southern and the Ralph Burns Orchestra in 1956 with the David Mann and Redd Evans song “No Moon At All.”

Thanks for tuning in to this Moonlight Serenades edition of Afterglow.

MUSIC CLIP - BILLIE HOLIDAY, “IT'S LIKE REACHING FOR THE MOON” 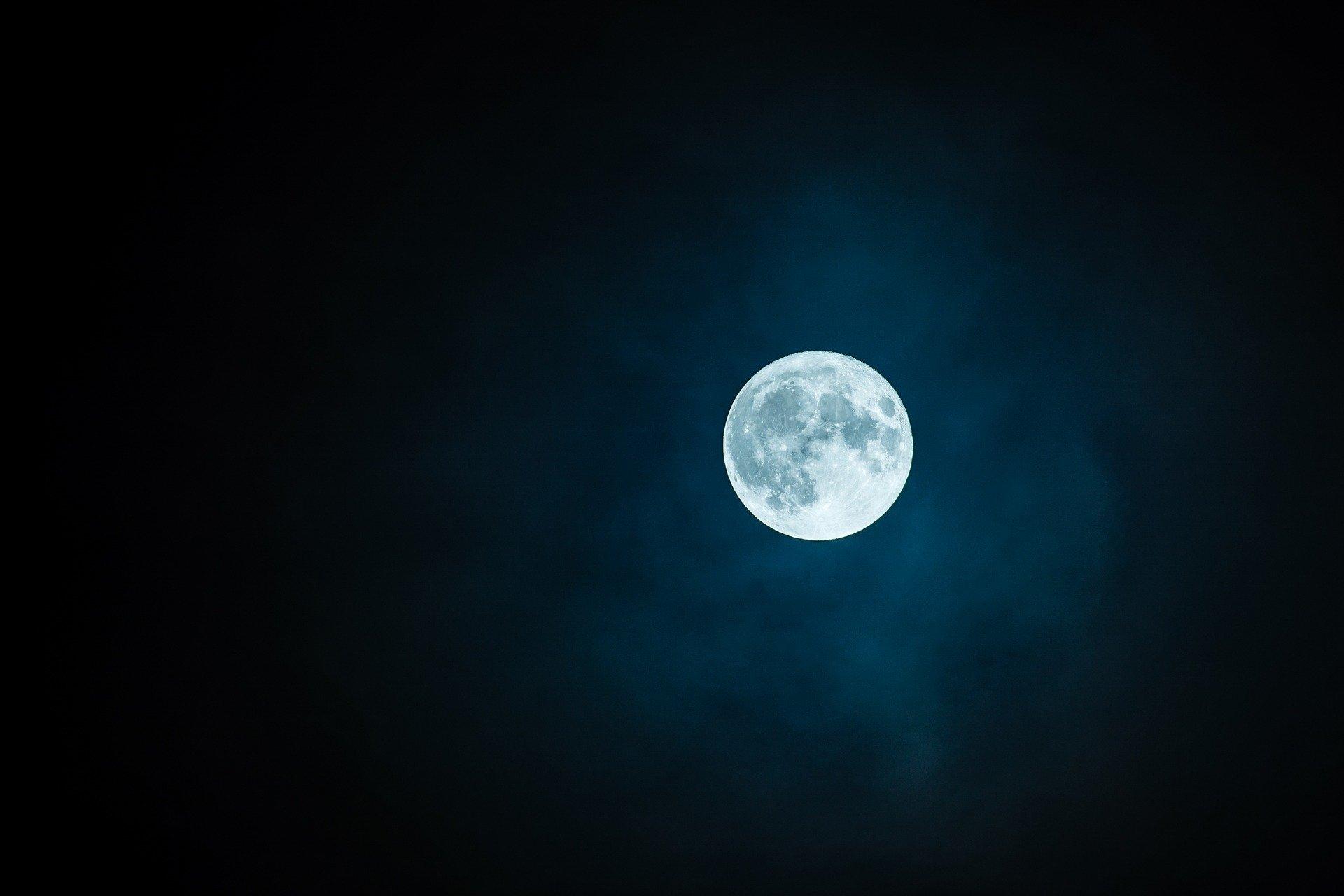 We're featuring moon songs from the Great American Songbook, like "Fly Me To The Moon" and "Moon River" (Pixabay)

For centuries, poets, artists, and musicians have been looking up to the “moon” for artistic inspiration, an activity that shows no sign of slowing down. So naturally, the “moon song” is a popular and familiar kind of song that shows up in the Great American Songbook. It’s so familiar that I’ve actually already put together an entire hour devoted to moon songs before on Afterglow. This hour, I’ve decided to dive even deeper into the moon song catalog, uncovering some songs that I may have missed, from the well-known to the, perhaps, unknown, all sung by some favorite singers.

Moon songs featured on this episode: