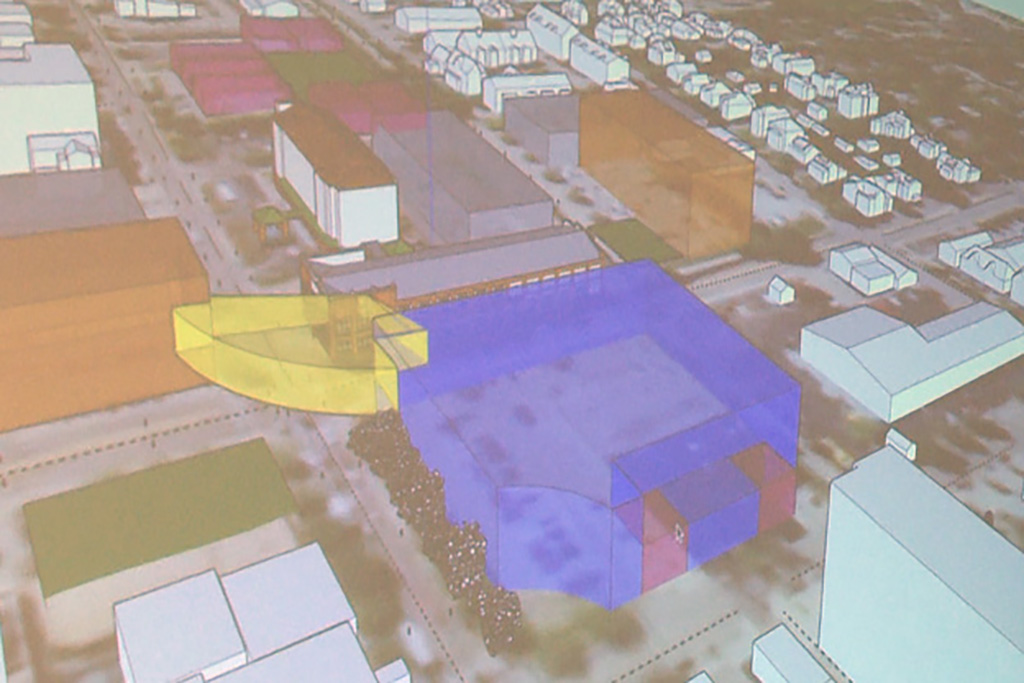 The city made a $5 million purchase of the Bunger and Robertson property off College and Third streets to develop. (WFIU/WTIU News, Joe Hren)

Bloomington city leaders have been planning to expand the Monroe Convention Center for years.

Project plans have slowly moved forward as developers were chosen and initial project plans were approved earlier this year.

Convergence Design Principle David Greusel says this project has been “the most extensive public outreach,” for a project his firm has ever done.

The firm is expected to come back to the city this month with a cost proposal to begin design work.

The $30 million for the convention center expansion comes from a one-percent county food and beverage tax increase that took effect February of 2018.

Mick Renneisen, Deputy Mayor and member of the Bloomington/Monroe County Convention and Visitors Bureau Board

“I think unique spaces are really popular now, authentic experiences are important, but also you kind of need that space to spread out. Really, a convention center means that it has an exhibit hall with it. What that does is it allows you to get a group that will use break out spaces, and an exhibit hall and a ballroom. It also tends to mean multi-purpose space, so I think that the multi-purpose, flexibility aspect of it is essential.”

John Whikehart says there have been around 31 public meetings to discuss the convention center expansion since 2017. The two architecture firms, Convergence Design Principle and Schmidt Associates will meet with the steering committee next week to talk about cost estimates and project proposals.

“It’s been very important throughout this process that we not lose the civic nature of the center, and it continues to be available to local groups. Sometimes convention center can imply something other than that particular usage.”

Dan O’Connell says convention centers can have a large economic impact on a community, but competition to attract groups and events is steep.

“There’s a lot of competition for conventions, trade shows, special events, corporate meetings. All across the United States, what we’re finding is the destinations have to have more than chicken and chairs. They have to have a destination that’s desirable, amenities in close proximity to their convention centers, and the better packages are winning the battle to get the economic impact from these very large, fruitful and profitable events.”

Mick Renneisen says there is no hard date to complete the expansion to the Monroe Convention Center. He agrees with O’Connell that the market among convention centers is competitive, but thinks Bloomington has an advantage.

“Of course everyone’s competing for some of the same business so, we have to differentiate ourselves. Some of that is in the asset you build, what it’s structured like, what it’s priced like, what kind of flexibility it has in terms of usage. Then some of it’s just what advantages do you have in your community. Do you have the right support structure, the hotels, the restaurants, and retail? How close are you to those things? It’s one thing to have a convention center on the interstate where you go to the O’Charley’s. It’s another thing to have a bunch of local, unique shops and restaurants right outside your door, like we will have in Bloomington.”