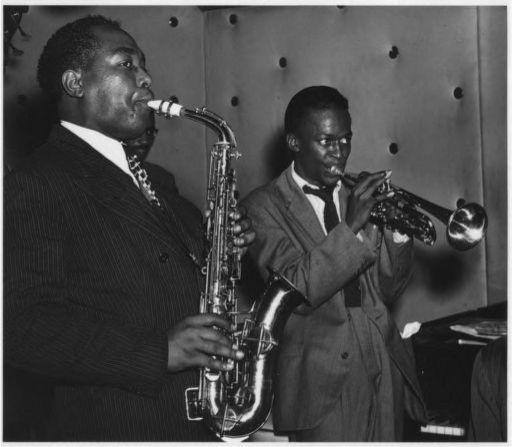 Saxophonist Charlie Parker revolutionized the sound of jazz when he arrived on the scene in the 1940s, expanding the harmonic and rhythmic possibilities of the music.  His nickname “Bird” came to symbolize his melodic flights of innovation, and though he lived to be only 34, he left behind numerous studio and live recordings that document his genius.  On this edition of Night Lights we’ll hear just a few of them, with Parker in the company of musicians such as Dizzy Gillespie, Max Roach, Thelonious Monk, Miles Davis, and others.

In 1988, more than 30 years after Charlie Parker’s passing, jazz critic Gary Giddins wrote that “Parker was the only jazz musician since Louis Armstrong whose innovations demanded a comprehensive reassessment of all the elements of jazz.” In terms of Parker’s influence, his compatriot Charles Mingus once titled a composition, “If Charlie Parker Were A Gunslinger, There’d Be A Whole Lot Of Dead Copycats.”  It’s lofty but valid praise for the saxophonist, who was born in Kansas City on August 29, 1920.  Parker’s early years, his doting mother who bought him his first saxophone and his musical humiliation as a teenager at the hands of veteran musicians when he tried to sit in, his subsequent woodshedding in the Ozarks and the first signs of a lifelong drug habit, have all been well-chronicled by his biographers… and yet the source of his genius remains elusive, though he noted several times in interviews that he practiced and practiced, sometimes 10-15 hours a day—a contrast to the more decadent image that has often been portrayed in popular media.  He first came to notice among his peers while playing with pianist Jay McShann’s Kansas City territory band, and eventually made his way to Chicago and then New York City.  His professional comportment was sometimes erratic, but other musicians could already hear something new and exciting in his playing.  One of Parker’s favorite tunes and one of the first he learned to play was Fats Waller and Andy Razaf’s “Honeysuckle Rose,” which will serve as our musical point of entry—a December 1940 recording that Parker made with members of McShann’s orchestra at a Wichita radio station, and which Parker biographer Carl Woideck says “predicts much of bebop of five and ten years later with regard to melodic contours and swing.” It's one of the earliest recordings of Parker that we have:

Parker stayed with McShann through 1942 but eventually joined up with the big bands of pianist Earl Hines and then singer Billy Eckstine—orchestras that other young, progressive-minded musicians such as Dizzy Gillespie and Fats Navarro, but which unfortunately never recorded while Parker was with them, in part because of a dispute between the major record labels and the musicians’ union.  By 1945 the recording ban was over, and Parker began to make the records that eventually made him famous and more immediately began to change the direction of jazz.

We often hear Charlie Parker’s impact described as “revolutionary.”  So what was revolutionary about it?  The velocity, for one—nobody had played at the speed that Parker and fellow bop emissary trumpeter Dizzy Gillespie regularly attained—but it was also Parker’s discovery, made one night while he was playing Ray Noble’s “Cherokee,” that, as Parker later said, “by using the higher intervals of a chord as a melody line and backing them with appropriately related changes, I could play the thing I’d been hearing.  I came alive.”  In doing so Parker freed himself and the musicians he would soon influence to greatly expand the range of musical possibilities, to take popular tunes and reinvent them in whirling ways that made them nearly unrecognizable, reinforced by displaced beats—the results dissonant and oddly tuned to some, thrilling and new to others.

In November 1945 Charlie Parker made his first recording date as a leader for the Savoy label.  Several tunes are standouts from this session, including Parker’s tunes “Now’s The Time” and “Billie’s Bounce,” but a landmark moment occurred with “KoKo.”  “Koko” was based, appropriately enough, on the chord structure of “Cherokee”.  Jazz critic Gary Giddins describes “Koko” as “an explosion of sound, a mad scramble of notes.  Only on repeated listenings are the logic and coherence—the melodies—revealed…Parker’s sound is deeply, profoundly human; fat and sensuous, yet jagged and hard; inflamed with a gleeful audacity.  Braced by the cold winds of Max Roach’s drums, ‘KoKo’ struck with the violence and calm of a hurricane.”

Though Parker is rightfully acclaimed as an avatar of jazz modernism, his music was soaked in the blues as well as popular song, and he was a product of the swing era.  We can hear all of that in this solo from a 1946 Jazz at the Philharmonic concert:

Parker’s struggles with substance abuse are well-documented, and he rued his unintended influence when it came to heroin addiction, with some young musicians taking up the habit on the principle that if “you want to play like Bird, you have to be like Bird.”  Not long after the Jazz at the Philharmonic performance that we just heard he suffered a nervous breakdown in California that resulted in a six-month stay at the Camarillo state mental hospital.  He emerged in 1947 with renewed health and began a two-year run of small-group recordings for the Dial and Savoy labels that are now routinely grouped with Louis Armstrong’s Hot Five and Seven sides as seminal blocks of jazz history.  We’ll hear two of them in this next set, starting off with one that includes a young Miles Davis, who had become Parker’s roommate and a member of his band after moving to New York City in the mid-1940s.

That autumn Parker joined Dizzy Gillespie for a concert at Carnegie Hall that paired the trumpeter’s big band with singer Ella Fitzgerald.  Parker and Gillespie performed a small-group set that resulted in some of the most blistering performances we have of the two together.  Here they are doing Gillespie’s “Dizzy Atmosphere”:

Though Parker lived to be only 34, his live performances were amply documented, in part by passionate fans such as Dean Benedetti, who followed the saxophonist throughout the late 1940s and recorded more than 200 Parker solos.  In addition to these and many other amateur or bootleg recordings, there are a fair number of more official releases that offer us the chance to hear Parker operating in the looser strictures of a live environment, including numerous broadcasts that he made from New York City’s Royal Roost night club in late 1948 and early 1949—a period that many jazz scholars consider to be Bird still at his peak.  Here’s Parker at the Roost in 1949, performing his tune “Scrapple From The Apple":

That same year Parker made his first foray into a musical context that would provoke some controversy, recording with strings.  These recordings, made for Norman Granz’s Mercury and Verve labels, situated Parker as the sole improviser against ensembles and arrangements that some found saccharine.  Still, Parker managed on many of the with-strings sides to take creative flight, and he achieved his greatest commercial success with them.  Here’s the first one:

Granz made a point of showcasing Parker in more diverse settings than Parker’s Dial and Savoy sides, but the saxophonist still waxed numerous small-group records into the early 1950s, including one session that brought him together not only with Gillespie, but with the iconoclastic pianist Thelonious Monk as well. The date is sometimes downgraded for the involvement of drummer Buddy Rich, who was less compatible with the bebop sound than other musicians who might have made a better fit, such as Max Roach or Art Blakey. Still, the sheer talent and creativity of the musicians wins out in the end… here are Charlie Parker, Dizzy Gillespie, Thelonious Monk, and “Bloomdido":

During this era Parker was also recording at times in a Latin jazz setting, which gave him the opportunity to work outside of the small-group bop format that he was already beginning to find constrictive.  Here he is in December 1948 with Machito’s Afro-Cuban Orchestra, performing “Mango Mangue":

Two years later Parker would be prominently featured in Machito’s epic 17-minute recording of Chico O’Farrill’s “Afro-Cuban Jazz Suite” as well.  Parker would also record a less-than-successful date with a vocal group and a selection of Cole Porter tunes near the end of his run with Norman Granz’s various imprint that were eventually grouped under the umbrella of the Verve label… the more successful sides stemmed from small-group sessions that were done in 1953, when Parker was still playing well and not yet overwhelmed by various personal and professional pressures.  From 1953, here he is revisiting one of his most famous compositions--Charlie Parker and “Now’s The Time":

Parker’s final years were beset with struggle, loss, and financial and artistic uncertainty.  He spoke of wanting to study with modern classical composers and to break out of the bebop sound that he had done so much to help create.  In 1953 he told an interviewer that “your ideas change as you grow older. Most people fail to realize that most of the things they hear coming out of a man's horn, ad lib, or else things that are written, original things, they're just experiences, the way he feels -- the beauty of the weather, the nice look of a mountain, or maybe a nice fresh cool breath of air, I mean all those things. You can never tell what you'll be thinking tomorrow. But I can definitely say that the music won't stop, you keep going forward.”

Charlie Parker died on March 12, 1955 at the age of 34.  His health had declined rapidly in recent months, and the coroner who did his autopsy estimated his age to be that of a much older man.  The friend who was with Parker at the time, Nica de Koenigswarter, also known as the “Jazz Baroness,” said there was a tremendous clap of thunder when he passed.  The music didn’t stop, the music kept going forward, but without Bird… though his sound was still heard everywhere, fulfilling the graffiti tag “Bird Lives!” that began to appear on walls in the wake of his death. Charlie Parker and “Parker’s Mood":