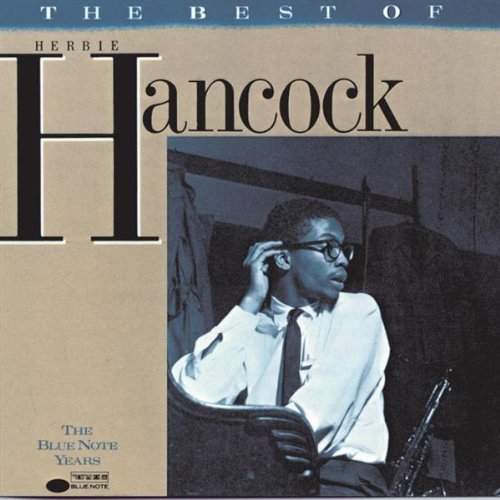 Try to imagine the 1960s jazz scene without Herbie Hancock--the pianist who anchored the rhythm section for Miles Davis' dynamic quintet, the composer who wrote "Maiden Voyage" and several other jazz standards, the leader who made impressive, exploratory albums such as Inventions And Dimensions and The Prisoner, the sideman who seemed to be everywhere, recording with numerous Blue Note Records label stalwarts such as Grant Green, Lee Morgan, Jackie McLean, and many others. Hancock's sound, described by writer Len Lyons as "a very improvisational modern jazz typified by superimposing rich keyboard harmony over modal, or scale-based, patterns," became a defining aspect of many of the era's greatest jazz recordings.

"Bring Me Three More Of Those Instead"

Hancock was born April 12, 1940 in Chicago, and made his first forays into piano with classical music, performing with the Chicago Symphony Orchestra at the age of 11. Interested in electronics from an early age, he started college as an engineering student but eventually switched his major to music. After graduating he lived with his parents and took whatever jazz gigs he could get while working as a mailman, until a call from jazz legend Coleman Hawkins started a series of events that eventually led to the piano chair in hardbop trumpeter Donald Byrd's band.

In 1962 Hancock made his recording debut as a leader for Blue Note. Originally he was supposed to provide three originals and do three standards, but after Blue Note producer Alfred Lion heard Hancock's originals, he said, "Bring me three more of those instead." Armed with a lineup that featured tenor saxophonist Dexter Gordon and trumpeter Freddie Hubbard, Hancock's album Takin' Off received a favorable reception, but there was one tune in particular that really helped the young composer make his mark. In 1965 he told DownBeat writer Don Heckman,

I remembered when I was in Chicago and the watermelon man used to go through the alley, and he had a little song, â€˜Wah tee mee lo-w.' There were cobblestone alleys, and the first idea I got was to try to make some kind of rhythmic sound like a soulful wagon going over the cobblestones, with the horse's hooves and everything. For the melody I started thinking, â€˜Suppose somebody were calling the watermelon man-what would they say? They'd say, â€˜Hey, watermelon man.' So I tried to write a melody that sounded like that.

Percussionist Mongo Santamaria fell in love with the song and made his own hit recording of it; we'll hear Hancock's own version, with Dexter Gordon on tenor sax, Freddie Hubbard on trumpet, Butch Warren on bass, and Billy Higgins on drums.

"You're Making The Record, Aren't You?"

Though Takin' Off and the success of "Watermelon Man" launched Hancock's star as a leader, he continued to work frequently as a sideman throughout the 1960s, appearing on numerous dates for Blue Note and other labels as well. It's easier, perhaps, to find artists on Blue Note from this time with whom Hancock didn't record. He seemed to be able to adapt to any musician's style and vision, even as his own voice continued to evolve. It was his association with one musician in particular that helped raise Hancock's artistic profile even higher in the mid-1960s.

In 1963 Miles Davis was several years removed from the triumph of Kind Of Blue, still looking for a new musical alchemy to cohere as he experimented with different lineups. Donald Byrd had introduced Davis to Hancock a year or so before, and Hancock began to hear rumors that Davis might want to bring him into his band. Eventually the legendary trumpeter summoned Hancock through a brief phone call to a practice session in the basement of his house, where Hancock found himself playing with teen prodigy drummer Tony Williams, bassist Ron Carter, and saxophonist George Coleman. Davis himself popped in only briefly for three days running, then told the musicians at the end of the third day to come to the recording studio the following Tuesday. Hancock, confused, asked Miles if he had been hired. "You're makin' the record, aren't you?" David gruffly replied. Hancock learned later that Miles had been listening to the musicians practice without him through an intercom on the third floor of his house.

Working in Davis' so-called "Second Great Quintet, allied with other young masters such as saxophonist Wayne Shorter, Hancock found new musical vistas opening up at a rapid pace, aided by the trumpeter's approach to the compositions that his band members brought to him. "He'd take the inherent structure and leave us room to breathe and create something fresh every night," Hancock told writer Len Lyons. "That's why it was always fun to play with Miles."

From TV Jingle To Jazz Standard

Hancock's early period yielded several compositions that would become jazz standards, including one that resurfaced in the early 1990s as the primary sample for the jazz-rap group Us3. "Canteloupe Island", with its funky, ostinato-powered groove and simmering Freddie Hubbard trumpet lines, captured a cool, mod-jazz mid-Sixties vibe.

The song that Hancock considered perhaps his best started out on an airplane napkin, a rhythm that he heard in his head and jotted down while the Miles Davis quintet was flying out to California to make the record that would become ESP. Hancock lost the napkin, but unconsciously rediscovered the rhythm while playing on the ESP track "Eighty-One." He wanted to use it for a TV commercial he'd been commissioned to write for a Yardley men's cologne:

I was originally trying to create a different rhythmic framework. We usually have accents that are on beats two and four. I wanted accents that were strong, and different, but not like R and B.

He gave the song a spiraling structure, making the first two chords the last two chords as well. The ad agency gave the music more of a tango feel, but Hancock recorded it himself and gave it a title that came from his sister Jean, who said "that song sounds like a voyage. A maiden voyage."

The following year would find Hancock recording music for a movie soundtrack, Michelangelo Antonioni's Blow-Up, a kind of mod-noir film about a fashion photographer in Swinging London. Hancock also stayed busy as a sideman and leader, continuing to work in the Miles Davis Quintet and making records for Blue Note. For his 1968 album Speak Like A Child, Hancock reworked two pieces he'd already written for Davis' group, emulated a stripped-down Gil Evans sound using a flugelhorn, bass trombone, and alto flute, and expressed a desire to make the record "more about sounds than chords." He also recorded an alternate take of one song that almost amounted to his first solo piano recording. The song, he said, "reflects that particular quality of sadness you feel at childhood being gone."

Around the time of Speak Like A Child's release, Hancock took a vacation in Brazil, and subsequently learned that Miles Davis was using Chick Corea in his place. The "Second Great Quintet" was in its early stages of dissolving, and Hancock realized that the time was right to strike out on his own. He formed a group as the 1960s drew to a close that would eventually turn into the so-called "Mwandishi" Sextet that served as a launching pad for Hancock's electric and funk-infused musical adventures of the 1970s. In 1965 he had expressed his wide-ranging exploratory ambitions to DownBeat writer Don Heckman and concluded, "I guess I'm still a kid at heart wanting to chase fire engines." Hancock would keep chasing those fire engines for decades to come; at the age of 30, embarking in new musical directions, he had already created a classic-jazz legacy.