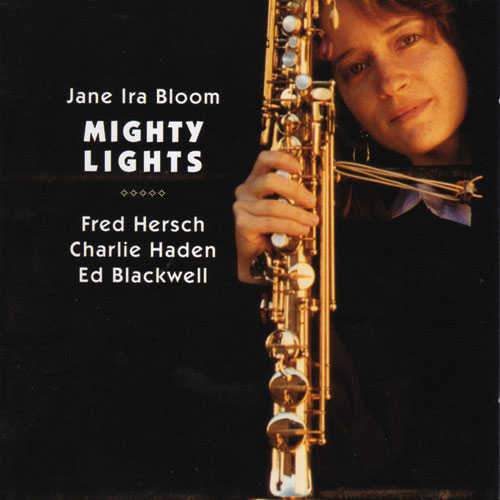 In the 1980s a new generation of women jazz musicians emerged who expanded their predecessors' push against the patriarchal boundaries of the jazz world. On this edition of Night Lights we'll hear music from pianist Geri Allen, singer Cassandra Wilson, drummer Terri Lyne Carrington, guitarist Emily Remler, and saxophonist Jane Ira Bloom, as well as recordings from women who were already jazz veterans, including Marian McPartland, Carla Bley, and Joanne Brackeen.

We open with Brackeen, the first woman to hold the piano chair in Art Blakey's Jazz Messengers, and her rendition of Richard Rodgers and Lorenz Hart's "Thou Swell," recorded during a private concert at Maybeck Recital Hall in Berkeley, California in 1989. When she saw how nice the 50-seat studio was, Brackeen insisted that the show be recorded, which led to the Concord label documenting 42 such performances in all as part of their Live At Maybeck series.

In the 1980s women jazz artists continued to make progress in a long-male-dominated scene that had often been a vanguard for racial equality, but rarely for gender equality. In the 1994 book Madame Jazz, which celebrated the emerging generation of women instrumentalists, author Leslie Gourse quoted drummer Terri Lyne Carrington's observation on the growth of female players and her remark that "It's no longer a matter of women being fashionable or a fad." Women were beginning to receive National Endowment for the Arts grants, more opportunities to record as leaders, and more attention from jazz critics. Still, entrenched attitudes of male chauvinism persisted, if expressed less overtly than before, particularly in a decade that saw a retrenchment of more conservative cultural values, after the upheaval of the 1960s and 70s.

In this program we'll hear some of the younger musicians who first came to note during the 1980s, as well as a couple of veterans. I'll begin with pianist Geri Allen, born in 1957, and one of numerous jazz artists to come from Detroit's fertile 20th century jazz scene. Rooted in jazz, Allen followed an expansive musical path, playing with Mary Wilson and the Supremes and the experimental Brooklyn-based M-Base Collective, as well as becoming a member of the Black Rock Coalition. She performed in both avant-garde and straightahead jazz settings, and at the end of the 1980s made several recordings in a trio with bassist Charlie Haden and drummer Paul Motian. From her 1988 date Etudes with Haden and Motian, here's Geri Allen and "Dolphy's Dance":

Singer Cassandra Wilson, who was born in Jackson, Mississippi in 1955, was another artist who first made her mark in the 1980s, both as a member of the innovative M-Base Collective that also included saxophonists Steve Coleman and Greg Osby, and at the end of the decade as a singer who could put her own spin on standards-and whose future work would expand the parameters of the jazz and popular song repertoire. Jazz critics have noted her "remarkable ability to stretch and bend pitches, elongate syllables, manipulate tone and timbre from dusky to hollow." Here's Wilson in 1988 performing Irving Berlin's "Blue Skies":

Wilson's "Blue Skies" included another emerging female jazz artist of the 1980s, drummer Terri Lyne Carrington. Carrington, born in 1965, grew up in Massachusetts as a child prodigy on drums, playing a jazz festival with Clark Terry, receiving a full scholarship to Berklee at the age of 11, and getting a feature on the PBS children's biography REBOP. She spent much of the 1980s in New York City, working with musicians such as Stan Getz, James Moody, and Lester Bowie, before moving to Los Angeles and becoming the house drummer for The Arsenio Hall Show. In 1989 she made her recording debut as a leader, Real Life Story, with supporting cast members such as Carlos Santana, Wayne Shorter, and Grover Washington Jr. This track also features one of Cassandra Wilson's M-Base running mates, saxophonist Greg Osby, as well as another up-and-coming woman jazz artist of the 1980s, keyboardist Patric Rushen:

Carrington would go on over the next 25 years to win three Grammys, including one for her all-female-musician 2011 release The Mosaic Project.

Another significant women jazz artist to emerge in the 1980s was guitarist Emily Remler. Remler was born in 1957 and grew up in New Jersey; she wasn't a guitar virtuoso, and she didn't encounter jazz until she enrolled at Boston's Berklee School of Music. She honed her chops working in New Orleans in the late 1970s, impressing jazz guitar great Herb Ellis, and eventually landed a contract with Concord Records. She married Jamaican pianist Monty Alexander, played festivals, and recorded several albums as a leader with musicians such as Hank Jones. For a woman guitarist in the notoriously sexist world of jazz, it was a heady start to a career. Vivacious and passionate in her love of music, Remler won over critics such as Leonard Feather and Gene Lees, who said, "I was unprepared for the sheer strength of her playing. She was an extraordinarily daring player, edging close to the avant-garde, and she swung ferociously. There was also a deeply lyrical quality to her playing." Remler once told People Magazine, "I may look like a nice Jewish girl from New Jersey, but inside I'm a 50-year-old heavyset black man with a big thumb, like Wes Montgomery."

Remler made more jazz recordings throughout the 1980s, but sadly passed away at the age of 32 in 1990. You can hear more of her music and story on the Night Lights program Emily Remler: A Musical Remembrance.

While the younger musicians we've heard so far were making their first impact on the scene, veteran women jazz artists continued to play an important role as well. Two such artists were pianists and composers Marian McPartland and Carla Bley. As host of NPR's "Piano Jazz" series, McPartland introduced numerous significant jazz artists to a mainstream radio audience, combining her engaging conversational manner with an ability to appreciate and perform a variety of styles while still retaining her own artistic voice. During the 80s she also continued to record for the Concord label, including this tribute to composer Billy Strayhorn:

Composer Carla Bley, whose early work can be heard on the Night Lights show The Carla Bley Songbook, spent the 1980s making small-group recordings and an album of duets with her partner Steve Swallow, and also commenced a series of big-band releases, beginning with Fleur Carnivore:

In a future "Jazz Women of the 1990s" program, we'll revisit some of these artists and others such as singers Shirley Horn, Abbey Lincoln, and Betty Carter, who enjoyed late renaissances in those years, as well as emerging artists such as Maria Schneider. This program closes with music from soprano saxophonist Jane Ira Bloom, who recorded frequently with pianist Fred Hersch in the 1980s, became one of the first jazz musicians to experiment with emerging electronic technology, and later had an asteroid named after her, as NASA's way of saying thanks for her composition of a suite saluting the space shuttle Discovery; and we'll also hear from pianist Marilyn Crispell, who held down the piano chair in avant-garde icon Anthony Braxton's group for much of the decade, and whose early approach was characterized in Janice Stockhouse and Wayne Enstice's book Jazzwomen as including "the tactical use of tone clusters and crossovers, leapfrog phrasing, and even two-fisted thunderous pounding that heightened the expressive force of her music through the sheer magnitude of her physical involvement":