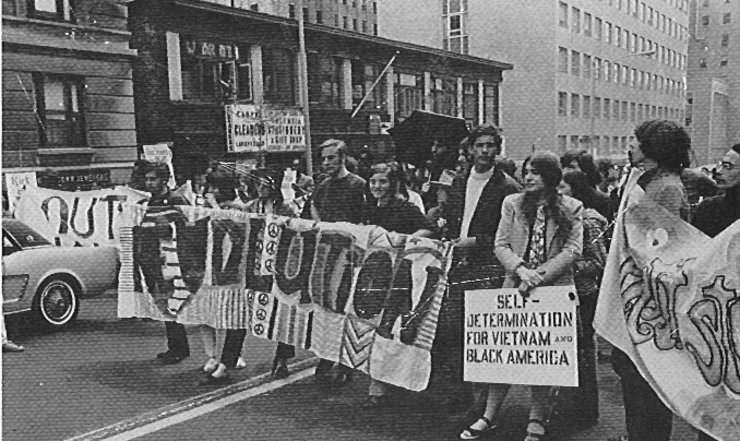 1968 has come to occupy a landmark in history, a year widely seen as a cultural flashpoint in which youth protest movements surged around the globe, and underscored by tragedy with the assassinations of Martin Luther King and Robert Kennedy. What did it sound like in jazz? On this edition of Night Lights we‘ll hear music from Alice Coltrane, Miles Davis, Nina Simone, Chick Corea, Herbie Hancock, and others.

Change In Many Forms

1968 was a year heard round the world, as students took to the streets from Paris to Chicago to Mexico City, protesting the economic, military, and racial policies of their countries. The Vietnam War continued to take a deadly toll on civilians and soldiers, and its growing unpopularity in America spurred President Lyndon B. Johnson to forego running for re-election. One of the candidates who vied to replace him, New York senator Robert Kennedy, was assassinated in June, just two months after the shooting of civil-rights leader Martin Luther King Jr. in Memphis, Tennessee. Rock and soul music were in cultural ascendance; the Beatles released the double-LP White Album and the iconic single "Hey Jude," while James Brown‘s "Say It Loud, I‘m Black And I‘m Proud" became the mantra of the black-power movement.

Trumpeter Miles Davis, always in pursuit of musical evolution, took note of the changing trends; when Leonard Feather interviewed him for a 1968 Downbeat blindfold test, Feather noted that the records scattered around Davis‘ room were by the Byrds, Aretha Franklin, James Brown, the Fifth Dimension, and other pop and R and B acts, but no jazz artists. Davis married a younger woman late in 1968, Betty Mabry, who had a strong influence on his tastes, exposing him to acts such as Sly and the Family Stone and Jimi Hendrix, who influenced the direction Davis‘ music began to take. In this opening set we‘ll hear one of the first recordings Davis made with a new keyboardist and bassist in his band--Chick Corea and Dave Holland--that exemplifies the emerging impact of what Davis was listening to in 1968, and we‘ll hear from Corea and the man he replaced in Davis‘ band as well; here‘s pianist Herbie Hancock with "Riot":

Miles Davis‘ former sideman, John Coltrane, who‘d gone on to become a jazz superstar in his own right, had passed away at the age of only 40 the year before, and some of his sidemen continued in 1968 to establish themselves as leaders in their own light, including his widow, Alice Coltrane, who made an album with two of her late husband's sidemen. We‘ll hear several members of Coltrane‘s 1960s inner musical circle in this next set, starting off with pianist McCoy Tyner, on Night Lights:

Coltrane's death has been seen in retrospect as a watershed moment for jazz, the opening of a void, but progressive forces in jazz continued to thrive in the wake of his departure. 1968 was a landmark year for iconic avant-garde jazz releases such as Don Cherry‘s Eternal Rhythm, Peter Brotzmann‘s Machine Gun, Anthony Braxton‘s Three Compositions Of The New Jazz, Michael Mantler‘s Jazz Composers' Orchestra project, and Roscoe Mitchell‘s Congliptious:

There was also a continuing cross-pollination of jazz with popular rock music of the mid-to-late 1960s. Saxophonist Steve Marcus, an alumnus of the Stan Kenton and Woody Herman big bands, teamed up with guitarist Larry Coryell to cut an album that included songs by the Beatles, the Byrds, and Donovan, while pianist Ramsey Lewis went into the studio mere weeks after the release of the Beatles‘ White Album in late 1968 and recorded ten of their new songs for his album Mother Nature's Son. From that album, here‘s Ramsey Lewis and "Back In The USSR":

Finally, 1968 marked the loss of two key political and cultural figures in Martin Luther King Jr. and Robert Kennedy, and the also-unexpected death of Wes Montgomery, a major jazz guitarist just several years older than King and Kennedy. I‘ll close out this 1968 edition of Night Lights with a recording that Montgomery made just a few weeks before his passing, as well as this riveting performance from Nina Simone of her civil-rights protest song "Mississipi Goddam," from a concert given just three days after the assassination of Martin Luther King Jr. on April 4, 1968:

More Of The Late 1960s On Night Lights

The Year In Jazz On Night Lights