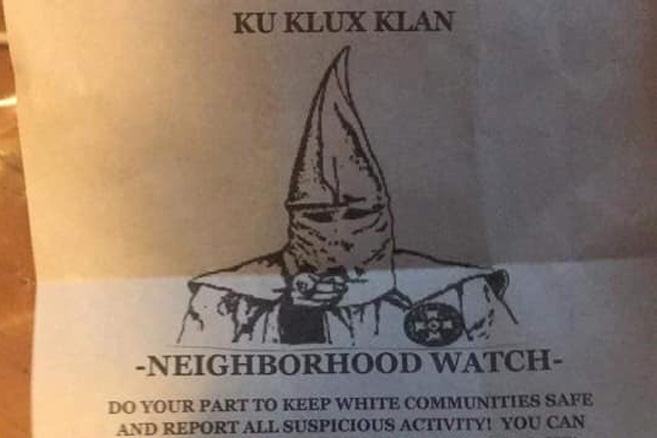 The Bloomington Police Department is investigating after they say residents found neighborhood watch flyers claiming to be from the Ku Klux Klan on Monday. Captain Ryan Pedigo says they received 10 reports of flyers being located in the city so far.

The flyers include the image of a hooded figure and say, “Do your part to keep white communities safe and report suspicious activity. You can sleep tonight knowing the Klan is awake.”

Police say they are investigating who is responsible for the flyers and whether they are affiliated with the KKK.

Mayor John Hamilton released a statement saying hate has no place in Bloomington. He urged residents who find any additional or similar material to report it to police. Police say the flyers were inside plastic bags and asks anyone who finds one to turn it over to police without opening the baggie.

We called the number on the flyer and the voicemail greeting says "You have reached the honorable sacred knights of the Klu Klux Klan." It asks prospective members to leave their information and directs them to an email address where they can upload proof of identification. The recording also includes racist rhetoric.

The flyers come amid ongoing controversy over a farmers’ market vendor with alleged white supremacist ties. FBI transcripts show Sarah Dye, the owner of Schooner Creek Farm, had conversations with a man convicted of vandalizing a Carmel synagogue.