The Reverend And The Duchess

The science of horticulture, long practiced back East, had gained little hold on the western frontier, and Reverend Beecher set about remedying the problem. 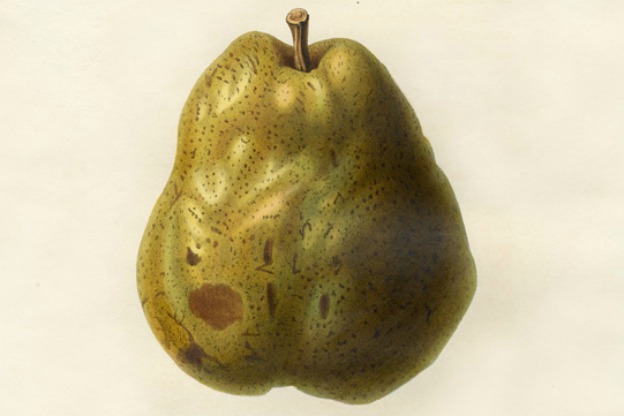 At the 1843 meeting of the Indiana Horticultural Society, the Reverend Henry Ward Beecher placed a large bid on a Duchess d'Angouleme pear.

Travelers across the state of Indiana in the 1830s and 1840s would have encountered large expanses of rural countryside, as farms replaced the old-growth forests that the first white settlers had found. Most of these farms had a small orchard—Hoosiers liked to grow apples and pears, as well as cherries, peaches, plums, and other fruits. The same fruit trees could also be found in the backyard gardens of town dwellers.

In 1837, The Reverend Henry Ward Beecher arrived in the state to take up a parish in the young capital city of Indianapolis. Beecher was, among other things, a passionate horticulturalist, and he noted with some dismay that Hoosiers were paying scant attention to the varieties—and hence the quality—of the plants that they chose. The science of horticulture, long practiced on the East Coast, had gained little hold on the western frontier, and Beecher set about remedying the problem.

In August 1840, the Indiana Horticultural Society held its first meeting at the new statehouse in Indianapolis. Participants came from all over the state in wagons and on horseback, bringing samples of the fruits they grew on their own farms and learning about new varieties being cultivated in other states. In some cases, the variety displayed was so rare that people could only look, and carefully touch and smell: W. H. Ragan’s parents returned from the meeting telling of being “permitted to handle” a Bartlett pear; also able to sniff the rare fruit, they compared its “fragrant perfume” to “that of a well-ripened muskmelon.”

At subsequent meetings, individual specimens of a variety of fruits were sold for their seeds. Beecher himself related to a friend in an 1843 letter that at that year’s exhibition “great competition arose for the pears.” Beecher had bid and won on a “Duchesse d’Angouleme” pear, which he had been set on obtaining: “I am afraid I should have doubled the bid rather than have lost her ladyship; and if all duchesses are of equal worth commend me to their society.”

From 1840 through 1847, the society spread its message through a newspaper titled The Indiana Farmer and Gardener and it continued to hold annual meetings to publicize and make available new and improved species of not only fruit trees but a wide variety of shrubs, flowers, and plants.

When Beecher left Indiana in 1847, the society disappeared for a time, only to reappear in 1860. By that time, Hoosiers across the state were enjoying Bartlett pears, Osceola apples, and other fruits, all brought to the Hoosier state by a pioneering horticultural society.

A Moment of Indiana History is a production of WFIU Public Radio in partnership with the Indiana Public Broadcasting Stations. Research support comes from published by the Indiana University Department of History.