Caroline Dunn: Heroine Of The Stacks

Caroline Dunn was a manuscript librarian who knew her collections, knew how to use them for research, and even how to introduce them to the uninitiated. 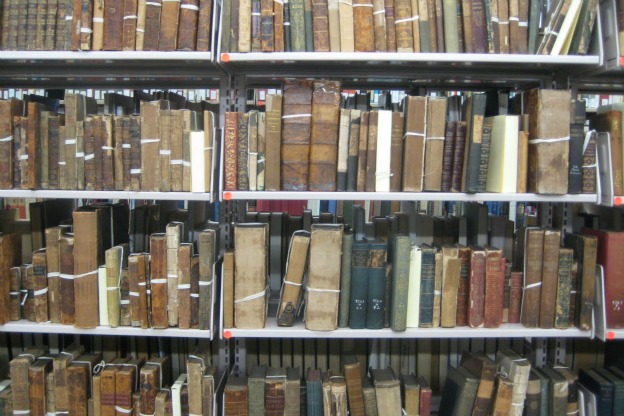 Caroline Dunn knew the collections at the Indiana Historical Society's library and could help everyone from the uninitiated to veteran users to navigate them.

From 1886 until 1924, Jacob Piatt Dunn, Jr. served as the secretary of the Indiana Historical Society, and became a well-known proponent of Hoosier history. Although less renowned, his daughter Caroline Dunn made equally important contributions to the society during the three decades she served as librarian for its William Henry Smith Memorial Library.

Born in Indianapolis in 1903, Caroline received her B.A. from Butler University in 1923, and worked for four years in the Indianapolis Public Library before taking a BS degree in library service from Columbia University.

Caroline Dunn was born in Indianapolis in 1903. After receiving her bachelor of arts degree from Butler University in 1923, she worked for four years in the Indianapolis Public Library. In 1928, Dunn took a bachelor of science degree in library service from New York’s Columbia University, then worked for another eight years as a librarian in Connersville, Indiana.

In 1936, she returned to Indianapolis to work as a reference librarian with the Indiana Division of the Indiana State Library; with three years experience in state history, Dunn then went to work for the state historical society, where she would remain until 1973.

Dunn played an essential role in expanding the collections of the library. She corresponded with dealers of rare books and manuscripts, and helped the library to acquire gifts from patrons and from many correspondents who wrote to the librarian inquiring about her potential interest in items in their personal family collections.

Dunn had an intimate and in-depth knowledge of the library’s holdings, and was praised by amateur genealogist and professional historian alike for her assistance in their research. State historian James H. Madison, writing in appreciation of Dunn after her death in 1994, recalled her help in introducing him to primary sources in Indiana history during his dissertation research:

No index, finding aid, nor CD-ROM disk could ever do what Caroline Dunn did for me. She was a manuscript librarian who knew her collections, knew how to use them for scholarly research, and even knew how to introduce them to the uninitiated. Sometimes still when I open a Hollinger box anticipating a bountiful harvest of letters, I think of Miss Dunn.