The French Connection That Has Historians Licked

There is no solid evidence to back up any theory of a “French Connection” to Southern Indiana's great buffalo salt lick. 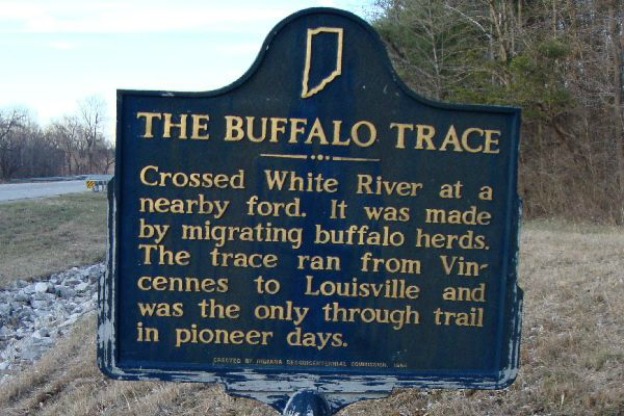 Most Hoosiers are familiar with French Lick—the valley in southern Indiana is the home of basketball legend Larry Bird, the historic resort of the same name, and the West Baden Springs Hotel—but few people can explain the origins of its name.

The second part of the name comes from the springs that would eventually bring thousands of people to the two famous resort hotels in the valley. The word “lick” comes from the salt licks that were known to Native Americans well before Indiana was even a territory.

Before they were hunted to extinction by white settlers, huge herds of buffalo summered on the Illinois prairie and wintered in Kentucky. They crossed the Wabash River on their journey south, and many came directly through the French Lick valley. The mineral springs of the valley, now famous for their high sulfur content, also contained high natural levels of salt.

As the spring water spread over the rocks and ground surrounding them, the water eventually evaporated but the salt was left behind. Wild animals, particularly buffalo and deer, came to lick at the salt deposits—thus the area was called by later settlers a “lick.” The buffalo returned northward every spring, now with their calves, and stopped for several days or more at the southern Indiana lick for rest and for the salt.

Early residents of the area told tales of their bellows reverberating in the hills.

Historians believe that when white pioneers reached southern Indiana, they used the buffalo trails—which would have been worn deep into the ground and would have been ten to twelve feet wide–as their first roads. In a 1787 diary entry, Gen. Josiah Harmar, marching from Vincennes to the Falls of the Ohio, passed through the valley and reported a “Great Quantity of Buffalo at this Lick.” In 1792, Moravian missionary John Heckewelder was in a group that camped in the valley for the night, and he wrote of a “salt spot, several acres in size” littered with animal bones.

But why is the valley named “French” Lick? One much-repeated local tradition is that the salt flats drew the interest of French settlers in the town of Vincennes. According to this story, a group from Vincennes camped on or near the location of the current French Lick Resort to make salt. Unfortunately, none of the surviving correspondence and records from Vincennes verifies this tale.

The French residents of the town did, however, lay claim to this part of Indiana—and much more. In 1794, the new United States government was attempting to settle land claims in the Northwest Territory. The French residents of Vincennes claimed that in 1742, the native Piankeshaw had granted French settlers over a million acres, including the French Lick valley. Local folklore also had it that a group of very early French settlers were later driven out of the lick by a group of hostile Indians.

Unfortunately, although one part of the French Lick name is easy to explain, there is no solid evidence to back up any theory of a “French Connection” to the great buffalo salt lick.