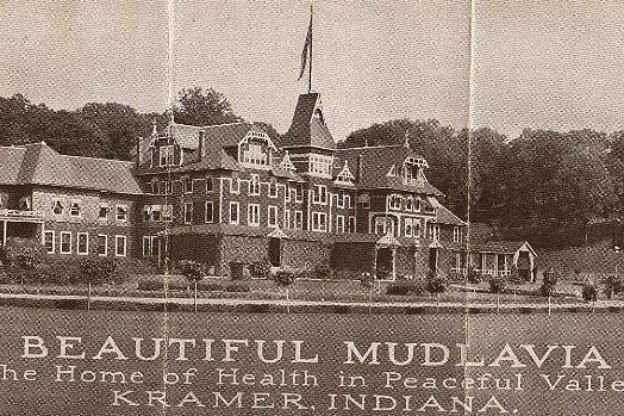 The healing powers of certain waters have been recognized from earliest times. For centuries, Native Americans found both recreation and comfort in mineral water and hot springs across North America.

Most Hoosiers are familiar with the famous Pluto Water spa at French Lick and Martinsville’s artesian water sanitariums and spas; fewer know anything about the “Mudlavia” resort in Warren County, renowned for its mud baths and mineral springs.

In the early 1900s, the proprietors of the Mudlavia Mud Cure and Lithia Water Baths in Kramer, Indiana, promoted a treatment for painful “rheumatism” (a catch-all term for what today might include osteoarthritis) that involved packing one’s body in hot mud and then bathing in hot water once a day for several days—often up to three weeks’ time.

A local farmer with a “serious case of arthritis” is said to have discovered the healing power of the mud and springs while “digging for several days in wet mud to drain a field. He noticed as he dug and drank the nearby water that his symptoms were lessening. Within days he was cured.

When his neighbors, the Camerons, heard the story they purchased the land and then leased it to H. L. Kramer who built a huge hotel and baths” at the site. The nearby town of Attica was on a rail line; patients could arrive from Chicago and beyond and be transported by horses and buggy (later by car) to Mudlavia.

The resort’s hotel, which could accommodate 250 guests, was a grand building which loomed up on a rise, dominating the valley in which it sat. The complex also included a chapel, a golf course, tennis courts, and a path for buggy rides. A 1905 promotional brochure, “Mud More Valuable than Gold,” promised “that all conditions for the health, rest or pleasure seeker are everything that can be desired . . . as full of comfort as sunshine, cheery decoration, antique oak and luxurious rugs can make them.”

Guests at the spa took only one treatment a day, so like other establishments, Mudlavia had to provide entertainment for their clientele. Many spa resorts offered fine food, and even racing and gambling for their wealthy clients. Mudlavia’s fare was tamer, and included croquet, golf, and buggy rides—perhaps because most of its guests were solidly middle-class. Most were between the ages of 41 and 70, and most were male.

The Mudlavia resort prospered until February 1920, when a fire that started in a linen closet burned the hotel to the ground. Although Kramer vowed to rebuild, it was difficult to restore the place to its former opulence. By the 1930s, people in the depths of the Depression had little money or time to spend at resorts, even those labeled as health spas.

The advent of antibiotics and other pharmaceuticals also brought a shift in public opinion about “the effectiveness and necessity of long stays in health spas”. Finally, the modern world increasingly valued speed and the newest technologies—the opposite of what spas offered.

The Mudlavia site operated as a hotel for a while, then became housing for the elderly and infirm, was later made over into a restaurant, burned in another fire in 1974, and was finally abandoned. Its springs, however, still flow; the water is tapped across the road from the former hotel and sold in bottles bearing the Cameron Springs label. The next time you drink bottled water, consider raising a toast to the memory of Indiana’s Mudlavia resort.