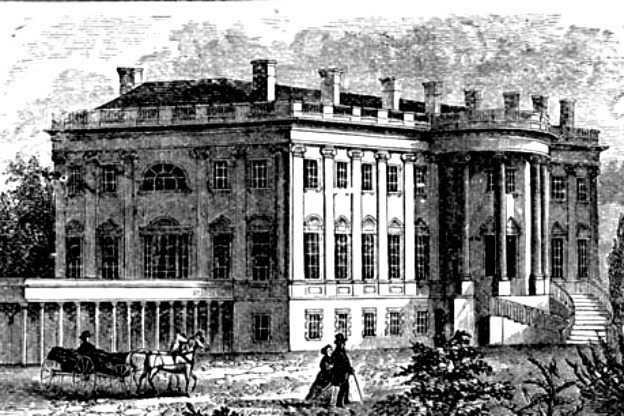 When John Adams was inaugurated as President in March 1797 he lived in Philadelphia, as the White House in Washington, DC was not finished.

Adams really was not interested in relocating to Washington. When he finally arrived in November 1800, he had to walk on planks to enter the White House where only six of the 30 rooms were finished. The house was cold, damp and uncomfortable. Carpenters who were still working on the house lived in shacks on the grounds, and there were kilns for making bricks and building debris scattered around the bare area surrounding the house and no sign of a garden.

When his wife Abigail arrived from New England three weeks later, her coachman had to stop repeatedly to hack away branches so the coach could navigate the roads through the surrounding woods and swamps.

Adams said that he must have trees and a little garden to walk in. But there was no money, and that was that. When his vice president Thomas Jefferson succeeded Adams, he reduced the size of the land surrounding the White House from 60 acres to only five and surprisingly asked for no garden. He lived in only a few rooms of the house and was satisfied with a few indoor plants. After six years when he had gained a second term, he had the grounds leveled around the house and had fences and walls built. He also drew up a few plans for some simple gardens that would be appropriate for a republican president who did not want to appear to be living lavishly.

However Jefferson was unable to implement the garden plans before he left office. Thus, after two presidents, the White House still had no garden at all and not even one flower.