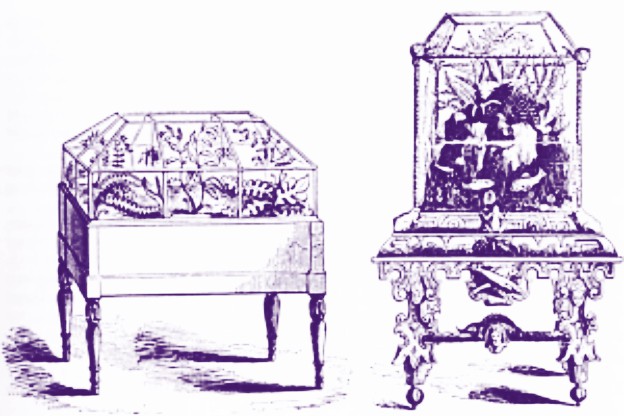 One of the major difficulties facing plant hunters before the middle of the 19th century was how to get the plants that they discovered in distant lands back home to England.

A London physician, Nathaniel Bagshaw Ward, found a way. One day in 1827 when he was about 40, he placed the pupa of a caterpillar in some mold (soil) in the bottom of a sealed glass jar and left it to develop into a butterfly. When he looked at the butterfly sometime later, he found a bonus-a tiny fern and a blade of grass growing in the mold. He also noted that moisture during the heat of the day rose up from the mold and condensed on the glass surface, later returning to the mold and keeping it humid.

Ward realized that plants that would not grow in the sooty London air of his own garden could grow well in a sealed jar. He then experimented with larger bell jars, and in 1834 he sent two sealed glass cases stocked with ferns and grass on a ship to Australia, where the cases were opened six months later and healthy plants were removed. Australian plants were then placed in the glass cases for the long sea voyage back to England. Those plants made an eight-month sea voyage safely, and from then on botanical explorers used Wardian cases, named after Dr. Ward, and these mini-greenhouses transformed the work of plant collectors world-wide.