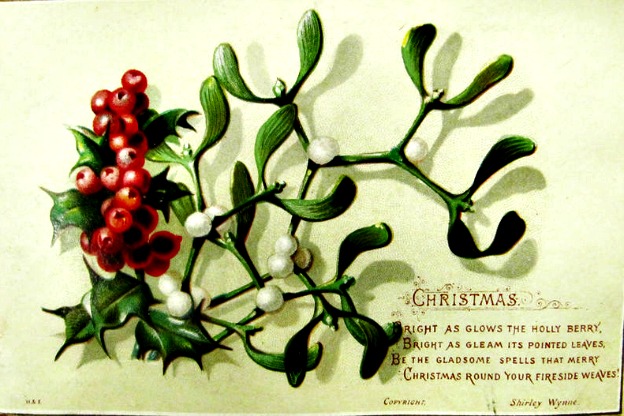 Botanical imagery has been used since ancient times. In the middle ages flowers were especially important as religious symbols. Chaucer and later Shakespeare frequently used botanical imagery in poetry, and many ancient images still persist today.

For example, we feel lucky if we find a four-leaf clover, and we still send red roses to express our love. We also decorate during the holidays using holly, with its lustrous red berries that brighten our homes when our gardens are bereft of flowers.

The hardy holly plant remains a glossy green all through winter and has traditionally been associated with strength, eternity and aggression. The druids used it to ward off evil spirits.

The shape of the spiny leaves and its sturdy branches can cause pain when they come into contact with skin. Thus the plant has been associated for centuries with aggression and combativeness.

Its hardiness and year-round good looks contribute to its association with eternity. However, in modern times we see it as a festive plant that is favored because it looks so decorative, and it is not associated with any specific religion. It has an insignificant flower, but it is a natural and versatile holiday decoration.

Winterberry holly is a deciduous holly with tiny white flowers that mature into clusters of red berries (Ilex verticillata). Evergreen holliesÂ such as Ilex crenata and Ilex glabraÂ have shiny evergreen leaves and red berries and plants are available in a variety of sizes.

To make an inexpensive centerpiece:

(Not all hollies have thorny leaves so choose a soft-leaved variety for arrangements.)