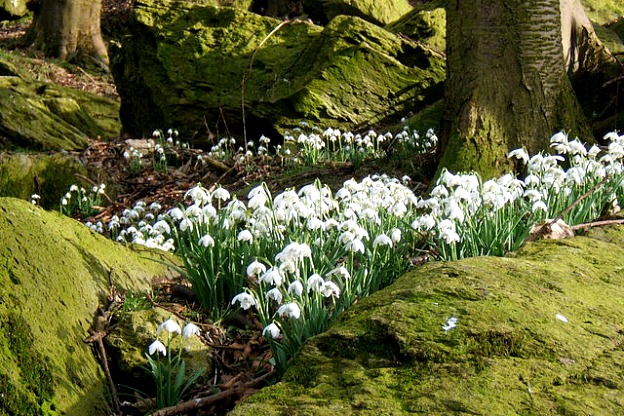 I have been reading Louise Beebe Wilder's book The Garden in Color that still speaks to us even though it was published in 1937.

She wrote, "Spring comes to a garden with tentative indecisive steps. A foot is advanced and then withdrawn." She also wrote about leafless branches seen against the sky and said:

Leafless the branches may be, but every twig, to the seeing eye, is inspired with life. We do not need the language of leaves to know that the whole tree is tingling with vitality. Often the bark has subtly changed in hue, and buds are suddenly in evidence, though tightly closed. The grass below has put off its drab winter coat and is slipping on a green one. And if we have planted snowdrops the autumn before, we have played a good part in the drama of the coming of spring.

Miss Wilder wrote eloquently about snowdrops (Galanthus nivalis), and the other early little bloomers: the yellow winter aconites Eranthis hyemalis* and the tiny, blue Scilla sibirica . She said to be sure to plant these bulbs early in the fall, close together, because they are "sociable and like to mingle their roots below ground as they do their flowers above it."

At this time of the year these intrepid little flowers are precious.

*Eranthus cilicica, a native of Asia Minor (found in both Syria and Greece), is more tolerant of our dry summers.