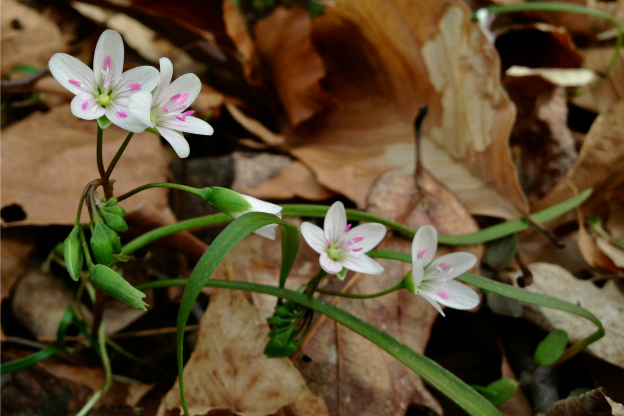 It grows from pea-sized corms that lie about three inches below the soil's surface and produces groups of white or pink flowers, each with five petals. Tiny seed capsules follow the blooms, and once they are ripe, these ephemeral little plants completely disappear until next spring!

The plants like moist, open sites with humus, and they spread quickly in deciduous woods.

These hardy little plants have grassy looking leaves that appear on opposite sides of the stem, starting about half way up. There are slight differences in the species that are native to Virginia and the Carolinas.

If you can find seed, plant it near the surface in spring or fall in pots containing ordinary garden soil. However, this wildflower self-seeds and spreads well, if you can get a start from a nursery or from a friend's garden.

Picking the flowers, though, is thought to damage the plant, and the flowers immediately wilt, so just admire them outdoors.