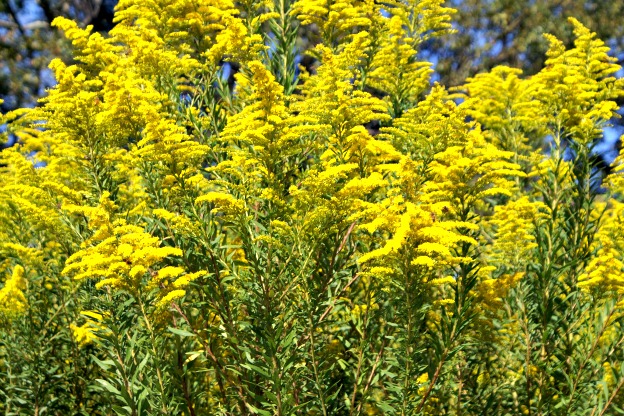 As fall wanes, the asters are done but some goldenrod persists. I like to see the bright yellow blooms in my garden, but I know only too well that if I don't pull the plant, or at least cut off the spent blooms, I'll have far too many next year.

Goldenrods belong to the genus Solidago, which contains about 100 species-most of which are native to North America. (There are just a few species in South America and Eurasia.)

Like the asters, to whom they are related, goldenrods flower in autumn, but they have smaller flowers and are bright yellow. Most of the clan are weedy plants, but a few in cultivation have large fluffy flower spikes, and there are some good modern hybirds.

Most are frost hardy and grow in both sun or shade in well-drained soil.

Most species self-seed, and small plants can be transplanted and large ones can be divided. The upright hybrid â€˜Baby Gold' reaches only three feet and blooms profusely in early autumn. â€˜Golden Wings' is taller at five feet and has a 3-foot spread. Both are hardy in zones 5 â€“ 10.

Cut the flowers for bouquets before the buds open, when they last well and no pollen is releasedâ€¦though the pollen from goldenrod does not cause allergic reactions the way ragweed does!