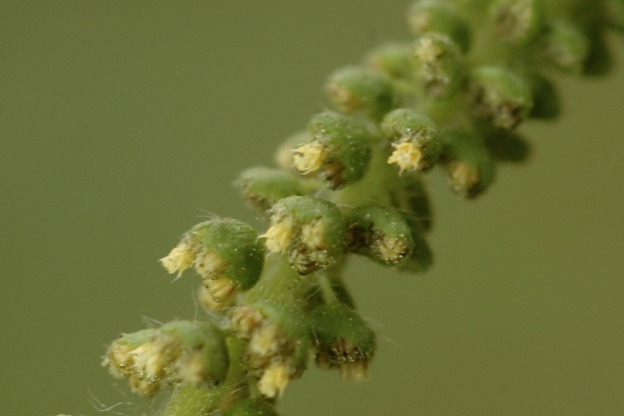 Ragweed belongs to the Ambrosia genus, and Ambrosia is certainly too sweet a word to be associated with such a rascal of a plant. There are about fifteen species of ragweed, and they grow all across this country, as they are extremely adaptable as well as vigorous.

The plants have fern-like foliage that is quite attractive, but only to farm animals. The plants spring up any time that there is bare earth. For example, when lots have been cleared or when there have been fires or floods. Thus, it is often referred to as a soil preserver.

The flowers are extremely small and inconspicuous and a pale green color. There are both male and female flowers. The male blooms are arranged in a spike, and each floret has five tiny stamens. The female blooms are in the upper leaf axils, (i.e., in the angles between the upper side of a leaf) and the stem or branch that supports it. Each bloom is followed by an inconspicuous brown fruit.

The pollen produced by the flowers is light and blown in the wind, so it causes a lot of grief to those people who are allergic to it. Ragweed blooms in late summer and fall, at the same time as the more showy goldenrod. However, goldenrod pollen is heavy, like the pollen produced by most cultivated blooming plants, and so it is not transported by the wind. Though innocent, goldenrod is often blamed for the upper respiratory tract problems caused by the heinous ragweed.