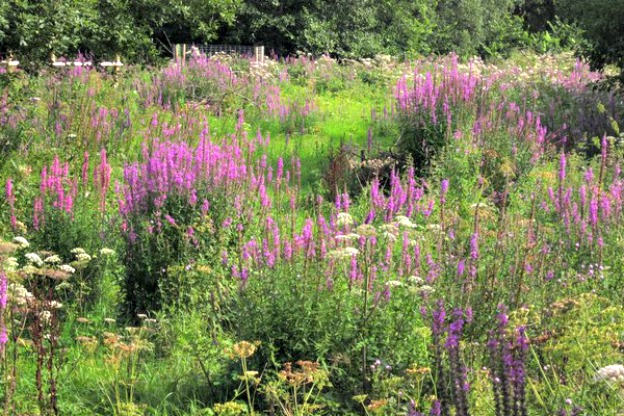 Lythrum salicaria, commonly known as purple loosestrife, is a tall perennial that produces spikes of purple/pink flowers in June and July. The leaves are opposite and the stems are square, and it spreads aggressively both by seed and rhizome. Even so called sterile cultivars of this plant will produce viable seed.

It used to be grown frequently in home gardens, as it is easy care and quite handsome. However, it is an invasive species, especially in wetland areas such as those in Minnesota and northern Indiana. In moist conditions it rapidly forms stands or colonies that spread and choke out all other types of vegetation. Thus it eliminates food and cover for many wildlife species that depend on a diverse mix of native plants to survive.

It is now illegal to buy, sell or plant purple loosestrife. It is banned in nurseries and farmer's markets, and this extends to its use as a cut flower in bouquets that are for sale.