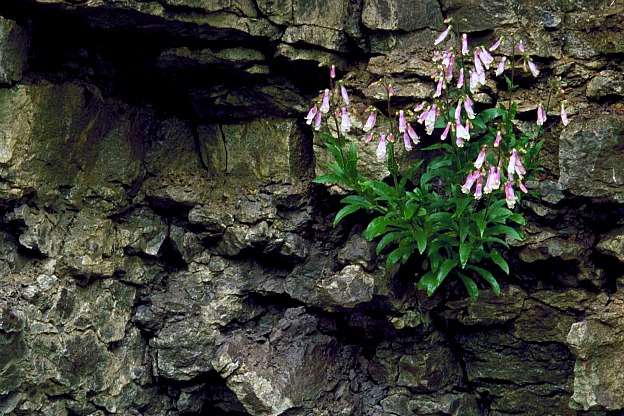 Penstemons (PEN-steh-muns) are members of the Figwort family, which includes perennials and subshrubs with narrow leaves and tubular or bell shaped flowers.

The flowers have two lips, a bit like snapdragon blooms. They come in shades of lavender, purplish-blue, white, pink, yellow, and red, and there are approximately 250 species in the genus.

These plants grow best in areas with cool summers, so if the summers are hot in your region, plant them where they get afternoon shade. Mulch them well each fall and divide them in the spring every five years to keep them strong.

P. digitalis is a species that grows two to four feet tall and is native to the eastern United States. It produces panicles of tubular one-inch-long white flowers from early to late summer and has shiny semi-evergreen leaves.

‘Husker Red' is well known in the trade because it has handsome red leaves, especially so when it is young, and its white flowers are shaded with pink. It's hardy in zones 2 to 8.

P. hirsutus (her SUE tus) has a name that lets us know that it is hairy. It grows one-and-a-half to two-and-a-half feet tall and is a sub-shrub that is native in the Northeast U.S. in zones 3 to 9. It has pretty blooms that are white inside with purple outside.