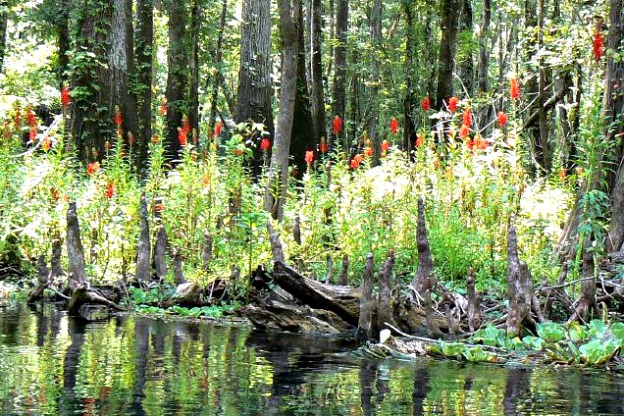 There are two native lobelias that are found from southern Canada to Texas that bloom in late summer. They are tall perennial wildflowers seen growing in moist pasture lands and on the banks of streams and rivers.

The red flowering Lobelia cardinalis blooms first in July, followed by the great blue Lobelia syphilitica that blooms in August.

North American Native Americans used these plants to treat venereal diseases, hence the name of the blue variety which is because of syphilis. However, today neither physicians nor herbalists believe there is any therapeutic effect from the use of any type of lobelia for these or other types of diseases. The early settlers used this plant to induce vomiting and as an expectorant, but now these plants are valued just because they are beautiful.

The plants have handsome narrow toothed leaves, either green or maroon, and masses of tiny florets on showy spikes. They are valuable, two-to-four feet tall garden specimens in sun or part shade, but they do require ample moisture to flourish in home gardens. In hot summers they need to be in the shade in the heat of the day.

Most of us who garden in areas with hot summers have found that the pretty annual lobelias also like cool moist sites. My annual lobelias never persist through a hot summer, however, I have better luck with the perennial lobelias which I grow in the shade, though they are not particularly long lived in my garden.

There is a related native lobelia called Lobelia inflata, commonly called Indiana tobacco plant, but it is poisonous so is not a popular member of the clan.