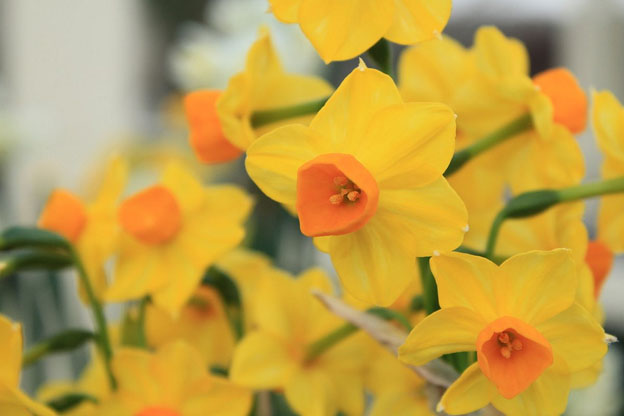 Sara Coleridge, a 19th Century poet, wrote a poem about the months of the year.

Makes our feet and fingers glow

March certainly brings daffodils in the lower Midwest, but of course, the flowers associated with any particular month vary depending on where one lives in the world.* (In Australia where I grew up, Chrysanthemums are Easter flowers because Easter comes in the beginning of fall in the Southern Hemisphere.)

However, in much of the Northern Hemisphere, March is the month where every garden worthy of the name, does have some daffodils in bloom. They seem to dance in the spring breezes, and they are flowers most people recognize and prize. They herald the earth's rebirth and are a symbol of spring even to non-gardeners. They even return year after year with no fuss or much care and are unappetizing to deer. A vase of daffodils lights up any room in the house.

Another March stalwart bloomer is forsythia, and they cohabit in the garden and in a vase in an appealing way.

The early little bulbs such as snowdrop, crocus, scilla, glory of the snow, grape hyacinth and windflower anemone also delight us in this blustery month.

Perennials begin to wake up, and the hellebore, Lenten Rose, has lots of flowers hidden beneath its leathery foliage.

March bloomers are tough for they sometimes have to contend with late ice and snow storms. Many are ephemerals, meaning that their foliage disappears soon after they bloom, so we enjoy them for just a fleeting time each year. However, though they are small and quickly disappear, their impact is substantial, indeed, because they signal that Old Man Winter is on his way out for another year.