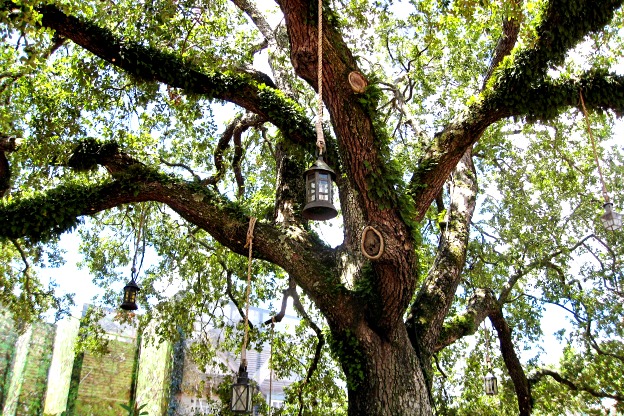 Over 40 years ago a stately 130 year old live oak, (Quercus Virginiana), was found on Disney World property and moved about eight miles to the Magic Kingdom.

The tree was enormous. It weighed a total of 38 tons with a root ball measuring 18 feet by 16 feet and was 4 feet deep. It was so heavy that holes had to be drilled through the middle of the trunk and steel dowel pins inserted so that it could be lifted up by a 100-ton crane.

The move was so complicated that it took months. The tree was replanted in the middle of Liberty Square in the Magic Kingdom, and there it gives a sense of permanence because it looks as if it has been there forever.

Thirteen lanterns, to represent the original 13 colonies, hang from this impressive Liberty Tree. It is certainly an appropriate logo for the Disney Horticultural team, which includes 500 professional gardeners, arborists, irrigation specialists and pest management technicians.