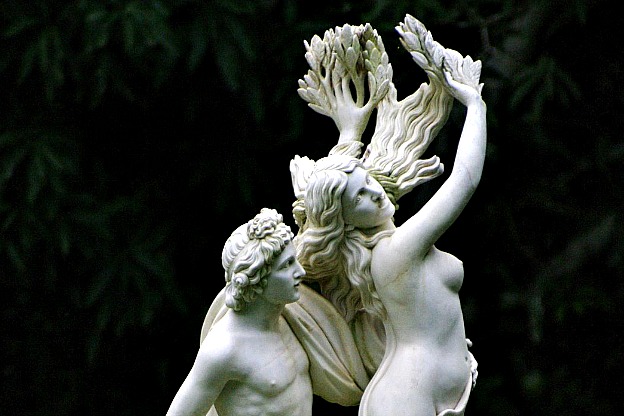 Laurus nobilis is the botanical name for the European species of laurel.

Here in America we also grow our own native species of mountain laurel and also a laurel- magnolia we call sweet-bay. But it was the leaves of the Laurus nobilis that were allegedly chewed by the priestesses at Delphi, and its leaves were also burned for incense.

The flowers of this laurel are white and insignificant. It is native to the Mediterranean so it likes good drainage and can also be grown as a houseplant, and its leaves-bay leaves-are used in cooking.

Laurel has an impressive history. The Emperor Augustus had two laurels growing on either side of his front door. The Greek word for the Latin laurus is Daphne, and when Daphne was chased by Apollo she was turned into a laurel tree. You may recall the wonderful statue by Bernini celebrating this transformation.

In the ancient Christian church, laurel was used to decorate for the celebration of the Nativity. And in Greece, bay leaves were spread on church floors to ward off devils and thunderstorms. Roman heroes were crowned with laurel wreaths, and we still use such phrases as "resting on our laurels" today.