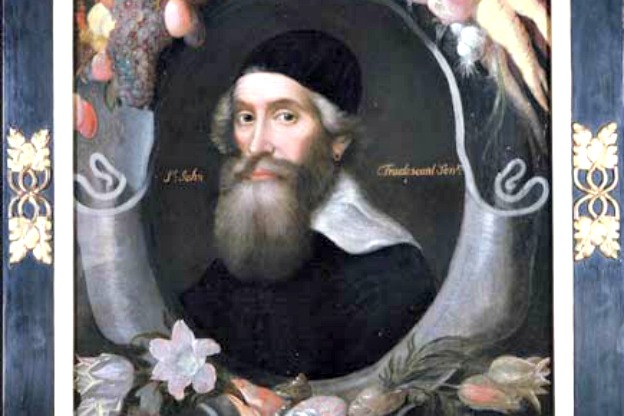 John Tradescant the Elder (1570-1638) was one of the first Englishmen to be well known as a plantsman and held the post of the keeper of the first King Charles' gardens.

He was a serious plant collector travelling often to the continent of Europe and was the first English botanist ever to visit Russia. Tradescant the Elder never made it to North America, but just before he died in 1638 he sent his son John Tradescant the Younger to America and he brought back many new types of trees and plants to England.

Some, such as Tradescantia Virginia, were named for him. We know this plant as the now common self-sower in our yards that we call spiderwort.

Evidence of Tradescant the Elder's work survives in two of his patron's English gardens, Hatfield House and Cranborne Manor, and both are still owned by the Cecil family. Many of Tradescant's records, lists of plants, and diaries of his trips are still in the library at Hatfield, and the garden there still features some of the plants he grew-such as primroses, double white roses, and â€˜Crown Imperial' fritillaries.

John Tradescant the Elder was highly regarded by his contemporaries. So much so that modern garden historians describe him as one of the first significant and probably the most influential of early designers of English gardens.