This And That In January 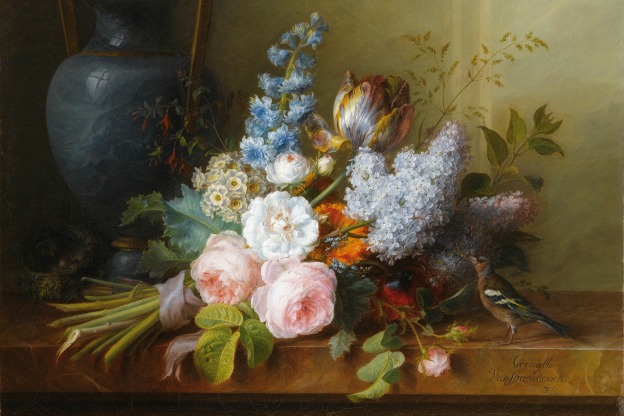 As early as the 18th century there were people who arranged flowers.

In paintings of flowers by Flemish and Dutch artists one can see beautiful examples of carefully arranged vases of flowers, though unlike today's artists, they did not paint flowers that were in bloom all at the same time. One sees, for example, spring blooms together in a vase with flowers that only bloom in the fall.

In the earliest books about flower arranging there are tips on how to make flowers last in a vase. For example, there is mention of the need to hammer woody stems, so that more water can be absorbed, to allow the flowers to last.

We still use this practice today, especially with the stems of flowering shrubs such as hydrangeas, that need a lot of water. After all, their name is derived from "hydro," which means water. Heads of hydrangeas wilt quickly when they first come into bloom, so cut the flower heads that are on woody, rather than soft green, stems and immediately submerge the flower heads and stems in cold water for a few hours and then let them drip dry before arranging them.

In January, we feel hungry for garden blooms, but of course, in my hemisphere there are no hydrangeas in bloom or even in leaf. But if you have flowering quince bushes you will soon be able to cut some branches to force. Hammer the stems well and put them in a vase of warm water in a warm spot indoors (but not near a vent). Change the water frequently and the warmth will eventually force the stems into flower.

And before long the forsythia can be cut too, as those flower buds swell in the branches in a similar way but a little later than the quince. If the vase water is replaced regularly it generally takes about 4-5 weeks for the buds in the stems to be forced into flower.