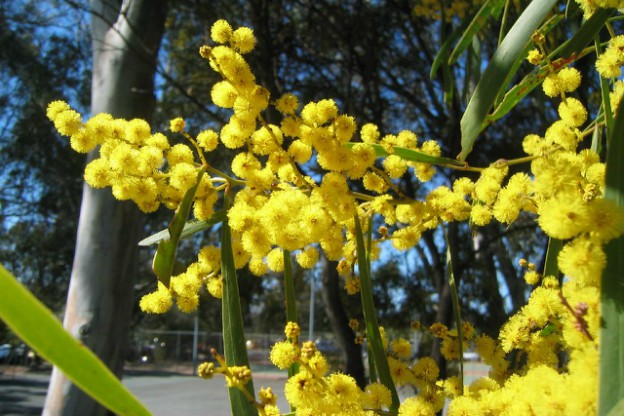 When it is winter here in the Midwest, it is, of course, summer in the southern hemisphere.

On January 26 each year, (which is Australia Day), I think a lot about Australia where I was born. The floral emblem of Australia is the golden wattle, which has masses of small, fluffy flowers arranged on spikes that appear mostly in early spring. The green or gray-green leaves are alternated. The wattle colors-yellow and green-are frequently the colors of the uniforms of Australian athletes at the Olympic Games.

There are about 800 species of shrubs and trees that belong to the Acacia genus, and wattles are part of the Leguminosae family. Mostly these plants grow in dry, tropical, or warm temperate regions, particularly Australia. Ornamental acacias are, however, grown extensively in warmer parts of the U.S., particularly on the west coast (zone 9) and in Hawaii for their showy flowers.

One species, Acacia dealbata, the silver wattle has grey foliage and is sometimes marketed as mimosa by florists. It's highly scented and is a source of gum arabic.

Acacias grow quickly but are short lived and tender below 18-20 F. They need lots of sunshine.