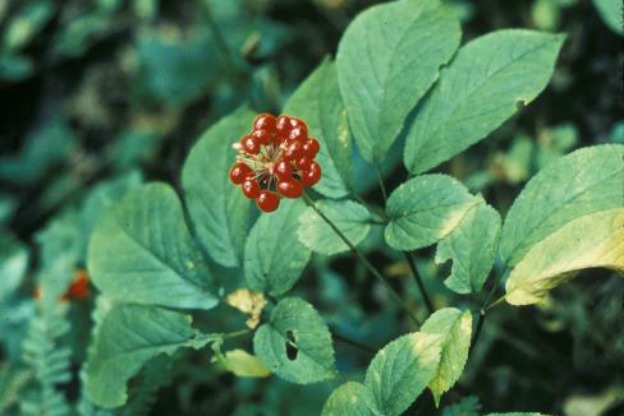 American ginseng was first noticed by our early colonists in the 1700's when they saw that it looked similar to a Chinese plant that was used medicinally.

The American ginseng, Panax quinquefolia, has the common name of "five fingers" because it has three large compound leaves, each with five leaflets that are produced at the top of a bare stem.

Ginseng is also sometimes called "tartar root" because of its fleshy and twisted looking root.

This is a plant that produces tiny greenish white flowers in June and July in an insignificant cluster. Bright red berries follow the flowers in late summer.

The root has been used medicinally for a variety of ailments, and it is chewed, made into a powder or brewed into a tea.

This perennial herb grows up to two feet tall but is increasingly rare in the wild today. Once it grew well in Canada and as far south as Louisiana and Florida. It is not an easy plant to cultivate, but it likes rich woodland soil with regular moisture.

Today it is still sought after by those who wish to gather it in the wild to sell, as the prices obtained for ginseng are worth the effort, even though it is a  species that is threatened.