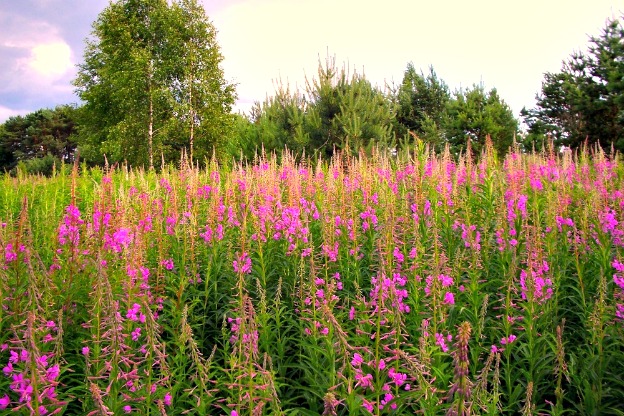 Fireweed thrives in burned landscapes. It is native to both North America and Europe, and it is appropriately named. During World War II when bombs destroyed parts of London, fireweed sprang up on blackened sites in the heart of the city. Often when the soil is disturbed on construction sites they sprout fireweed also.

On this continent, it grows wild from Canada south to North Carolina and west to California. It is a perennial plant that grows 2-6 feet tall. The seeds are in capsules and have silk so that when they are released they can be blown long distances on the wind.

Fireweed produces spikes of magenta flowers July through September. The leaves are long and alternate on the stem so the plant has the appearance of a small willow.

Native Americans used this plant medicinally as an anti-spasmodic and made soup from the young stems. In Canada the stems were cooked like asparagus, and the flower stalks and leaves are used in salads. However, no medicinal claim has ever been proved to be effective.

Fireweed is a member of the evening primrose family, and the botanical name is epilobium augustifolium. Common names include blooming Sally, purple firetop, and willow herb.