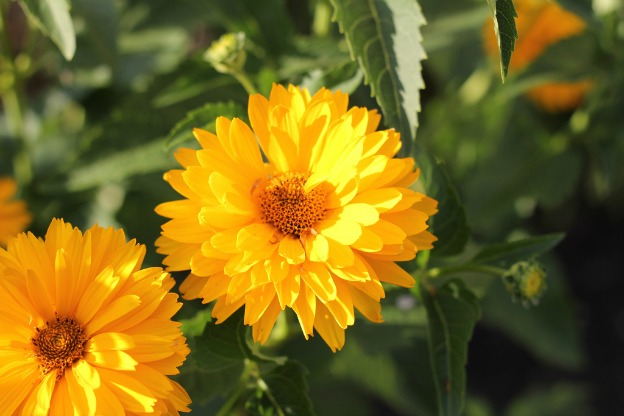 Heliopsis is from the Greek helios meaning "sun" and opsis meaning "resembling."

One of the cultivars 'Gold Greenheart', which is a helianthoides species, has lemon-yellow double flowers with a greenish tinge at the center of each bloom. From mid-August into fall it provides me with many lovely cut flowers that last at least two weeks in a vase.

I wouldn't be without this tall spreading and prolific plant. However, I have become a little gun shy about giving starts to friends since it is such a vigorous spreader. In fact, it is quite irrepressible. I always tell fellow gardeners to put it somewhere on its own, as it doesn't play well with others. It needs a lot of room to spread and no neighbors close by that it can overwhelm.

"Tuck it by a fence or behind the garage, not in your flower bed," I usually say. Despite this admonition, I frequently see recipients later who say indignantly, "That yellow plant you gave me just took over my entire flower bed!"

What can I do but bite my tongue?