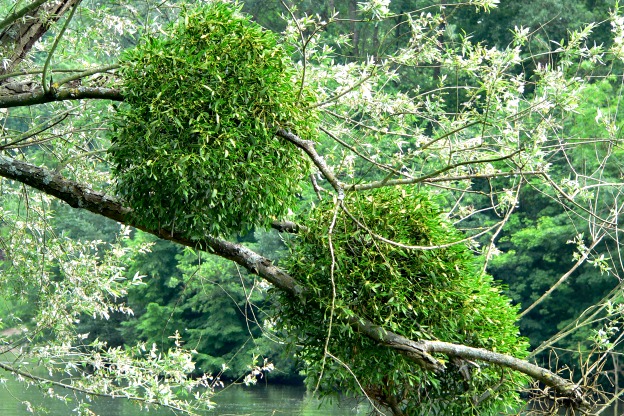 Our traditional holiday decorations include items drawn from many sources: early Greece, ancient Rome, the Near East, Britain, Germany and the Norse lands. Some of the most interesting legends feature plants used in ceremonies as symbols or as subjects of legends.

Plants such as holly and ivy, rosemary, laurel and mistletoe have always been popular. European mistletoe reportedly grew on oaks, but the American mistletoe, which is a related species, grows on maples.

Nowadays we think of a sprig of mistletoe as something to kiss under at a holiday party, but it has a fascinating history. Mistletoe is mentioned in Norse mythology and in Virgil's Aeneid.

It was called the "golden herb" by the Druids in Britain. Robed in white, they used a sickle to cut it and then scooped it up in a white cloth before it touched the ground. Viscum album is the botanical name of this parasitic plant, which has white berries that symbolized purity and strength to the Druids.

Because of its pagan associations, the Christian church once actually banned it. However, people obviously enjoy kissing under it, as they have continued to use it in holiday decorations across the years.