The Versatility Of Euphorbia 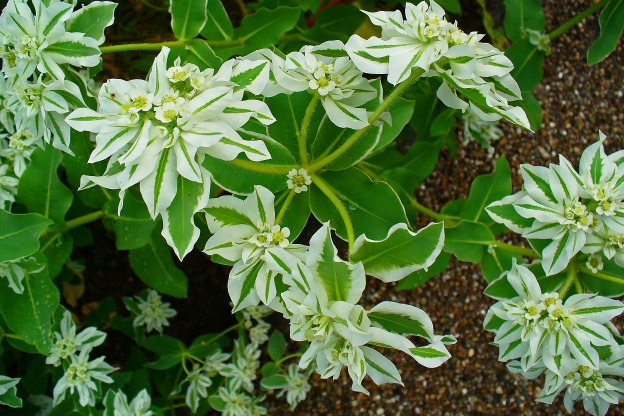 The genus Euphorbia is large-about 2000 species-and there is great variation between forms.

Some plants look a bit like cacti, and many of the species have flowers that are actually bracts.

Many of the plants are tropical and sub-tropical, though some members of this genus survive well in temperate regions.

At the holiday season we see many poinsettias, native to Mexico; they are the best known euphorbias in commerce. They are imported or are grown in cold regions in greenhouses.

Those that grow in the outdoors in cold regions are often referred to as milkweed or spurge and include Euphorbia polychroma with bright chrome-yellow clusters of flowers in zones 6 to 9. Like many in this genus, it exudes a milky sap when picked.

Euphorbia marginata grows in zones 4 to 10 and is native to North America. It produces bright green leaves margined in white and broad petal-like bracts surrounding small flowers in summer. It grows quickly to two feet and is a pretty foil for any brightly colored neighboring flowers.

Euphorbia schillingii or Schilling's spurge is a frost-hardy, clump-forming perennial, growing to three feet and was discovered in Nepal by Tony Schilling in 1975. The flat flowers are produced from mid-summer to mid-autumn, and the fall foliage is often colorful in zones 5 to 9.

Euphorbias are becoming more popular with gardeners recently, as they are versatile, easy- to-grow and deer resistant.