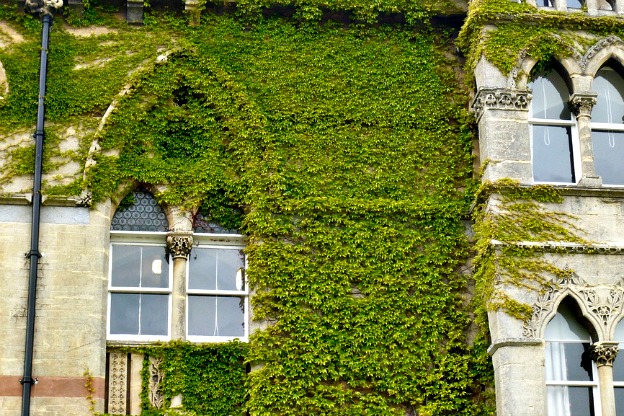 Many people think that English ivy (Hedera helix), and other ivy plants in the genus, are romantic. Universities, such as Harvard where Boston ivy grows on buildings, look attractive with ivy clinging to the walls. But ivy plants can act like bullies and are very difficult to eradicate.

The plants grow small rootlets called “holdfasts” that produce a glue-like substance that destroys the mortar between bricks. Evergreen varieties of ivy trap moisture, which continuously over time causes even more damage to the bricks. With the deciduous species, such as Boston ivy, where the leaves drop off in winter, at least there is an opportunity for the bricks to dry out from time to time.

The evergreen English ivy causes more damage and even destroys trees when it gets into the tree canopy and shades the inner leaves. When one tries to pull ivy off a tree the bark can be damaged.

The best method of removal is the use of lopping shears to sever the stems of the ivy repeatedly as close to the ground as possible and about 3 to 5 feet above the ground, (or as far as the gardener can reach). When this is done, the plant eventually becomes so weak that the roots die. Then the roots can be pulled or dug out.

A spray of white vinegar can also be used repeatedly, every week, during the growing season.

Brides sometimes ask for a bouquet of flowers with trailing ivy. I have spent so many hours recently pulling ivy in my yard that I have this fantasy that a bride with a bouquet of this type may find herself rooted to the altar.