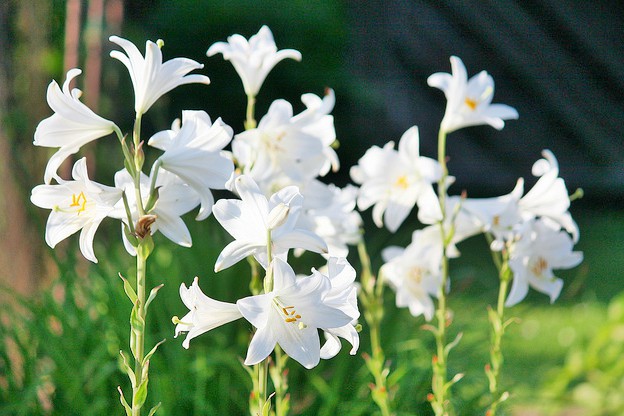 White is the color that symbolizes innocence and purity, but flowers were not used in the early Christian church because they were too closely associated with pagan ceremonies.

However, over time, white lilies became associated with the Virgin Mary. The Madonna lily, Lilium candidum, appears in paintings of the annunciation, and the lily's white color is now said to reflect the purity and virginity of the Immaculate Conception. This is the well-known Easter lily that is potted up and sold all over the United States every spring. It can be planted out into our gardens after the frosts have departed and will return in subsequent years, though deer may eat the buds.

In our modern Christian churches, flowers are absent during Lent but return to adorn the sanctuaries for Easter. White garden flowers such as lily of the valley and snowdrops are favorites when weather permits. Over time, more and more fresh flowers have been used in Christian church services, so that now wedding and funeral services seem bare without them.

In some northern Mexican villages, children throw flowers at dancers dressed as evil spirits during Easter week, and altars, religious buildings, and homes are decorated with both real and paper flowers.

In the Northern hemisphere, where Easter occurs in the spring, forsythia and daffodils are frequently used in churches for Easter decorations.